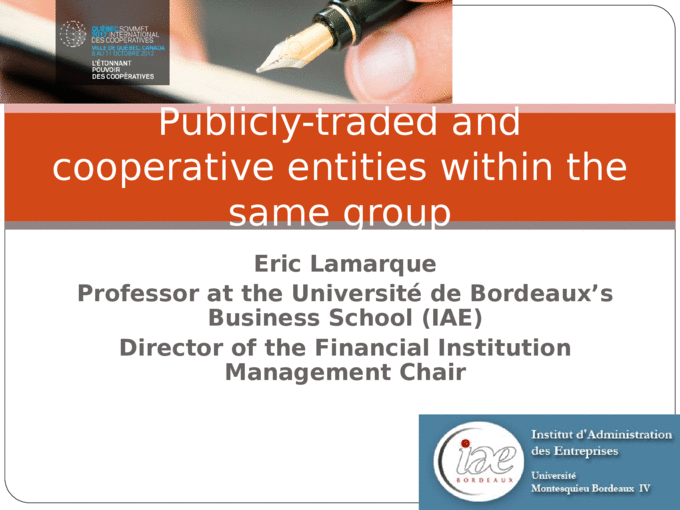 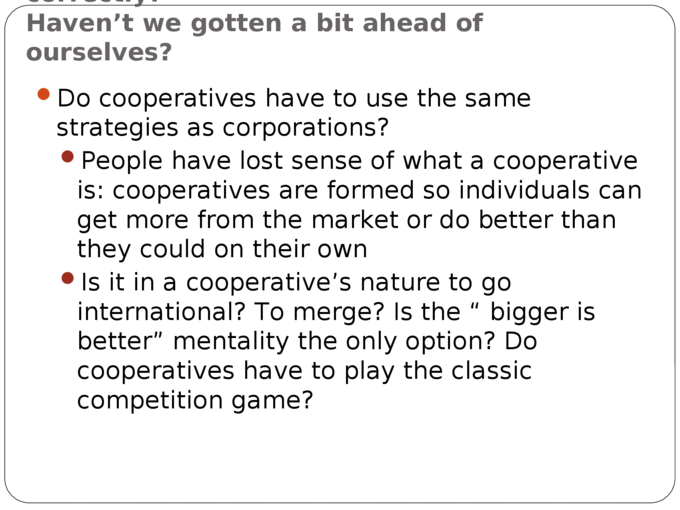 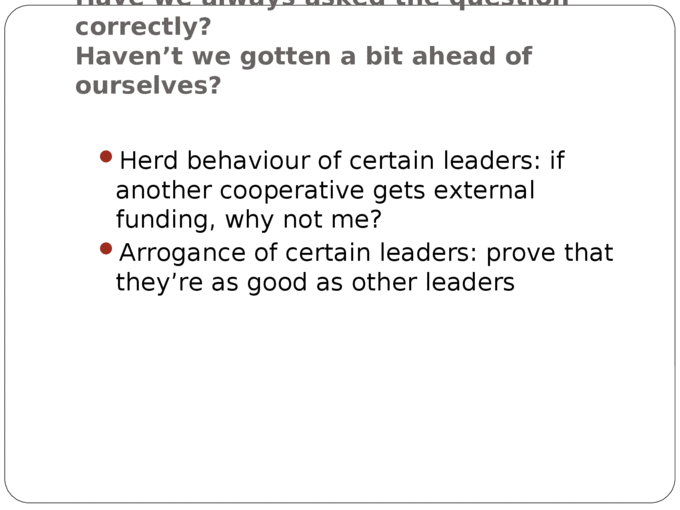 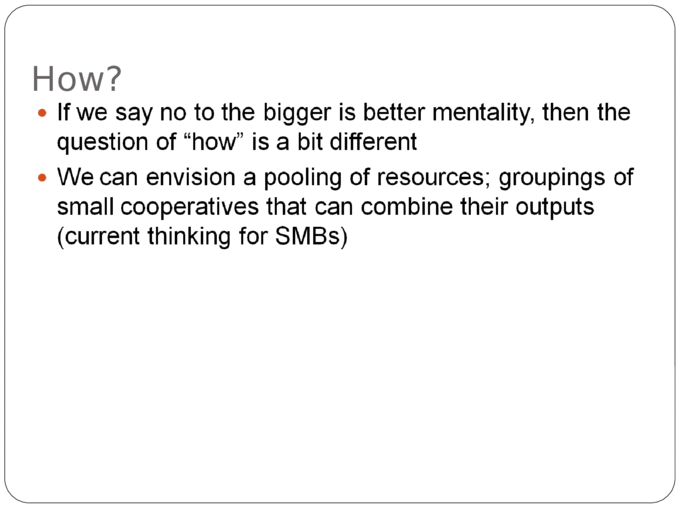 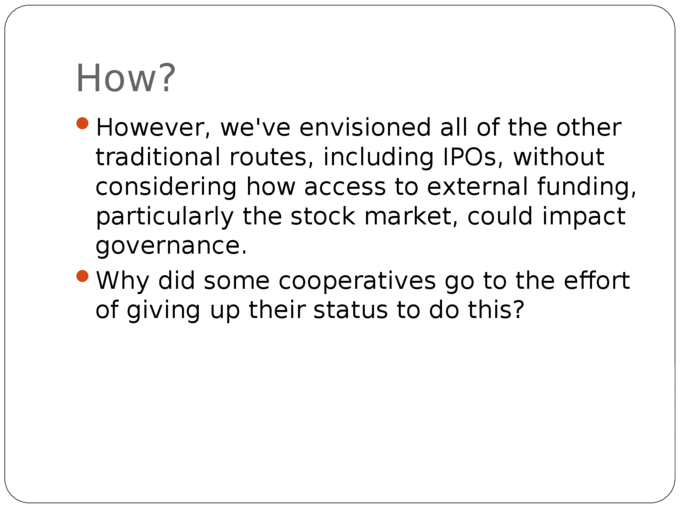 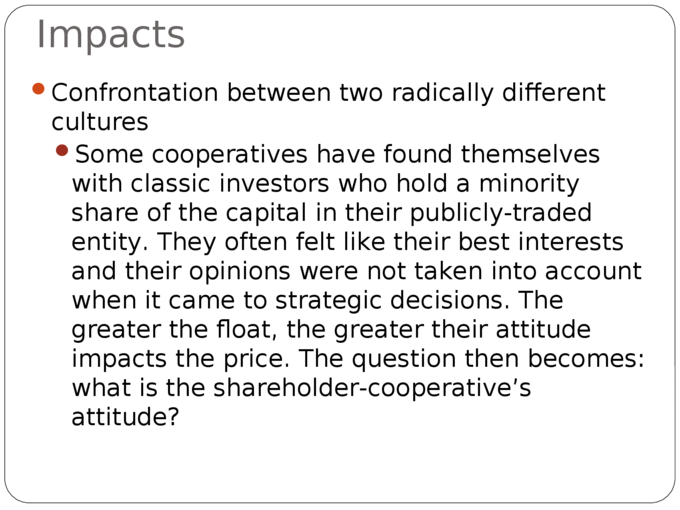 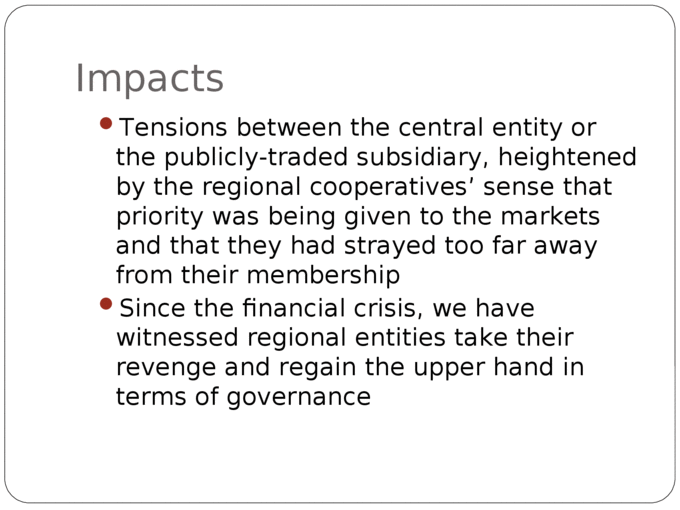 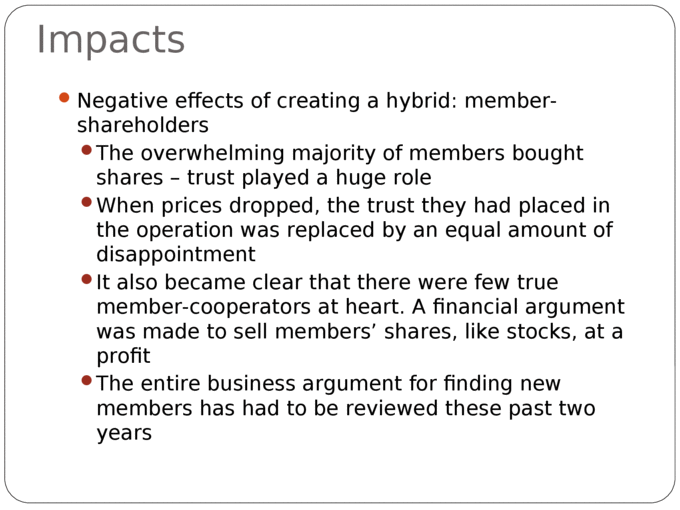 2. Have we always asked the question correctly?Havent we gotten a bit ahead of ourselves?Do cooperatives have to use the same strategies as corporations?People have lost sense of what a cooperative is: cooperatives are formed so individuals can get more from the market or do better than they could on their ownIs it in a cooperatives nature to go international? To merge? Is the bigger is bettermentality the only option? Do cooperatives have to play the classic competition game? 3. Have we always asked the questioncorrectly?Havent we gotten a bit ahead of ourselves? Herd behaviour of certain leaders: if another cooperativegets external funding, why not me? Arrogance of certain leaders: prove that theyre as good asother leaders 4. How? 5. How?However, weve envisioned all of the other traditional routes, including IPOs, without considering how access to external funding, particularly the stock market, could impact governance.Why did some cooperatives go to the effort of giving up their status to do this? 6. ImpactsConfrontation between two radically different culturesSome cooperatives have found themselves with classic investorswho hold a minority share of the capital in their publicly-tradedentity. They often felt like their best interests and their opinionswere not taken into account when it came to strategic decisions.The greater the float, the greater their attitude impacts the price.The question then becomes: what is the shareholder-cooperatives attitude? 7. Impacts Tensions between the central entity or the publicly-tradedsubsidiary, heightened by the regional cooperatives sensethat priority was being given to the markets and that theyhad strayed too far away from their membership Since the financial crisis, we have witnessed regionalentities take their revenge and regain the upper hand interms of governance 8. Impacts Negative effects of creating a hybrid: member-shareholders The overwhelming majority of members bought shares trustplayed a huge role When prices dropped, the trust they had placed in the operation wasreplaced by an equal amount of disappointment It also became clear that there were few true member-cooperatorsat heart. A financial argument was made to sell members shares,like stocks, at a profit The entire business argument for finding new members has had tobe reviewed these past two years