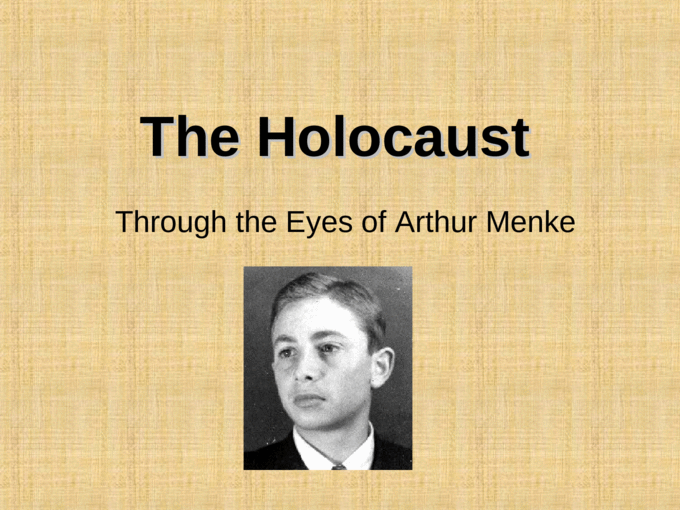 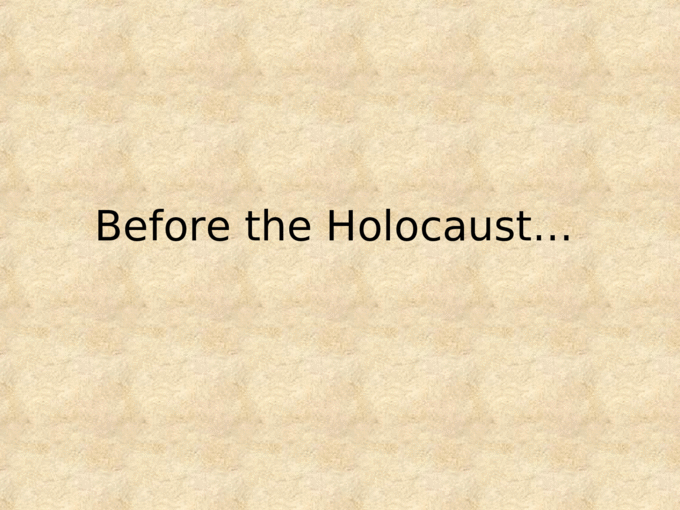 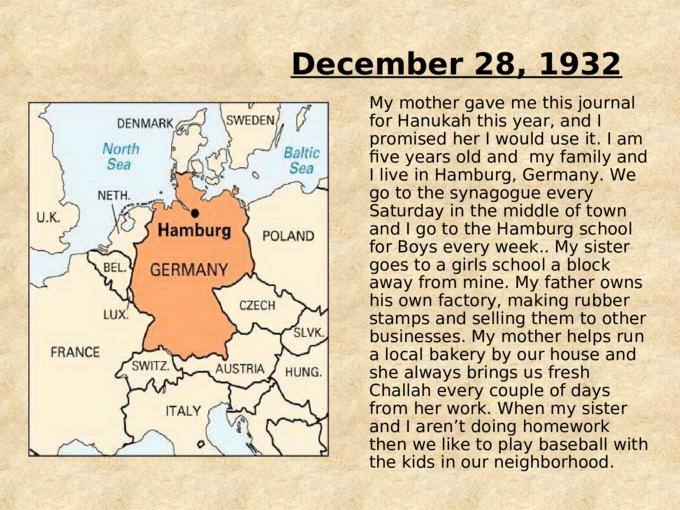 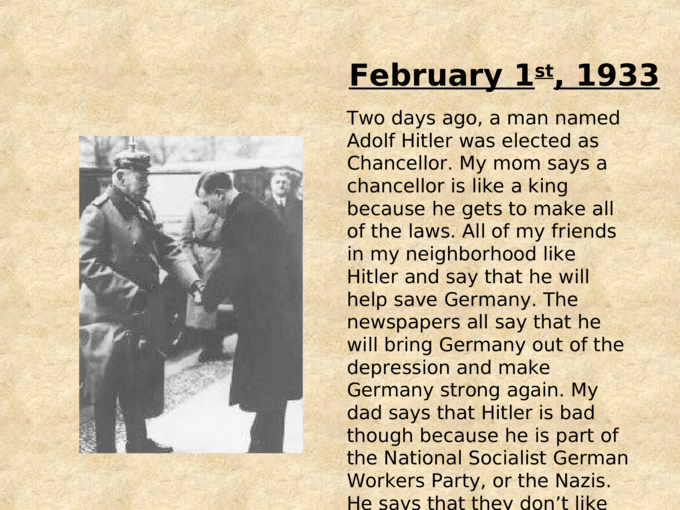 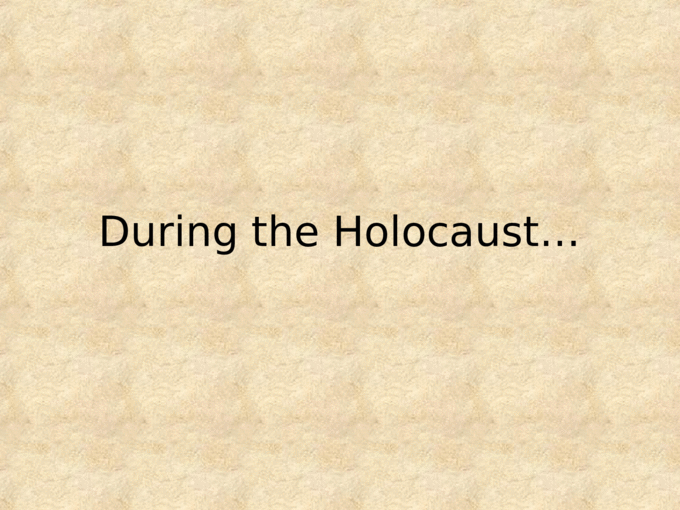 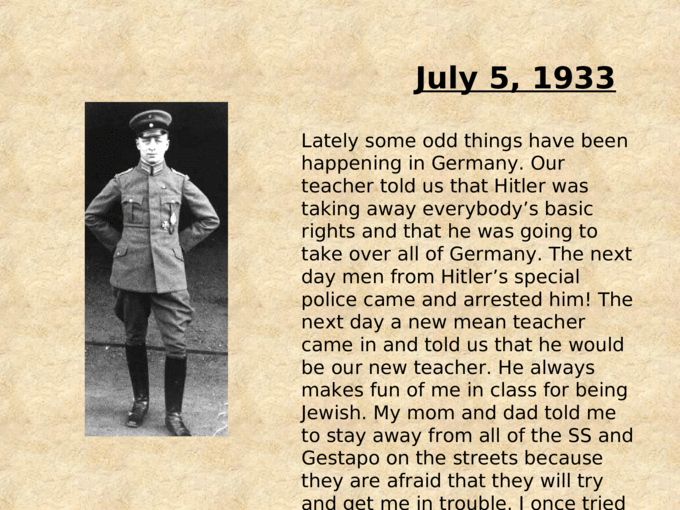 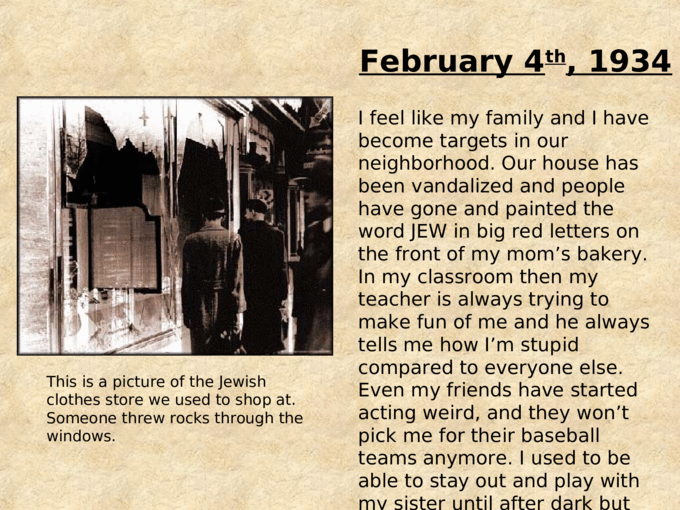 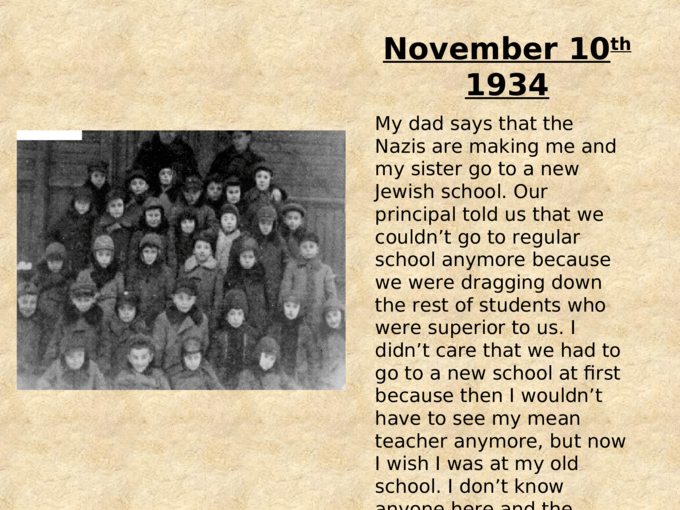 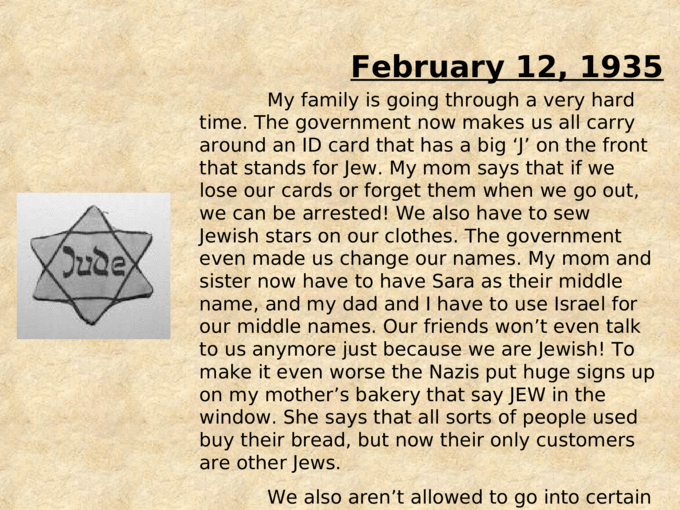 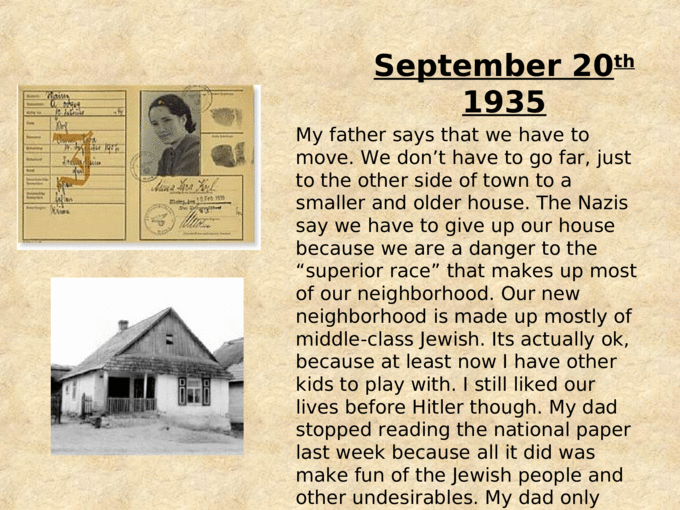 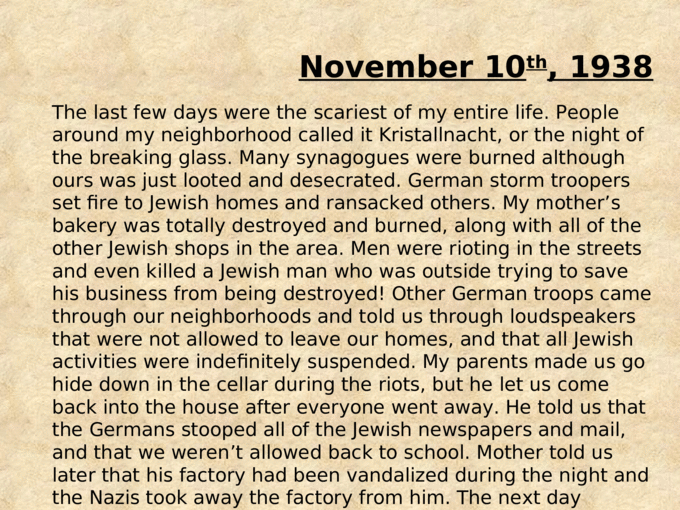 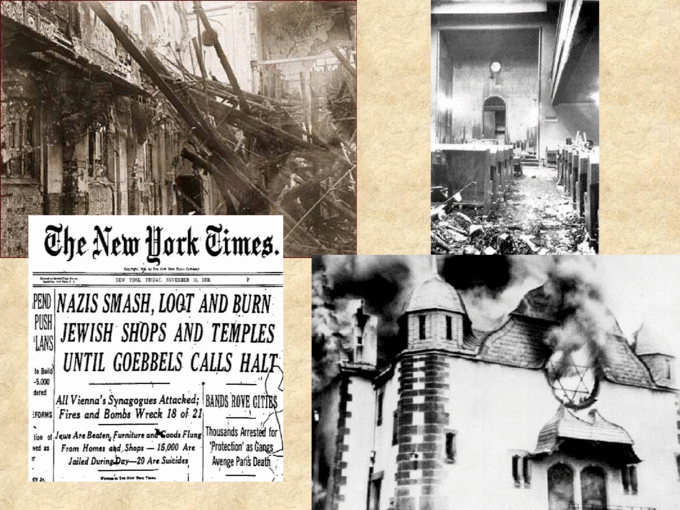 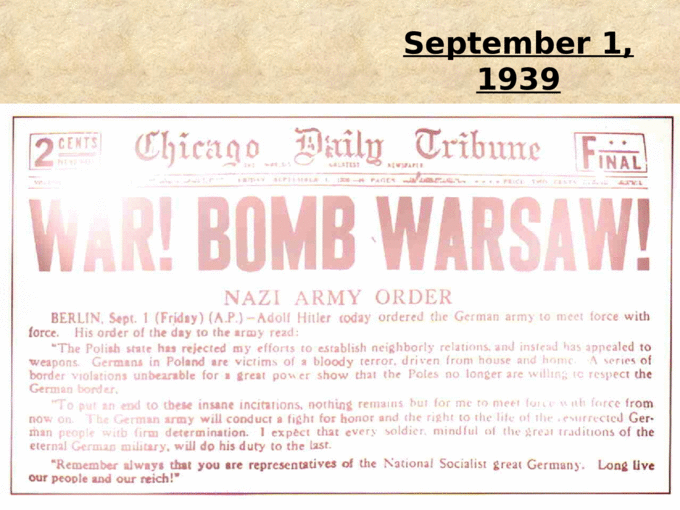 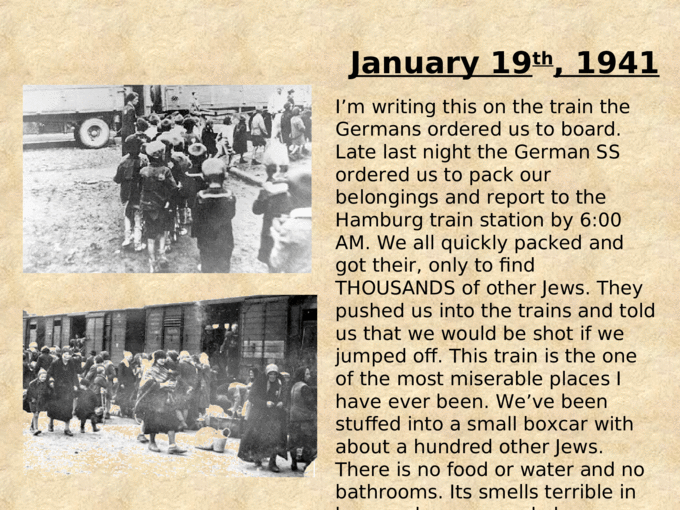 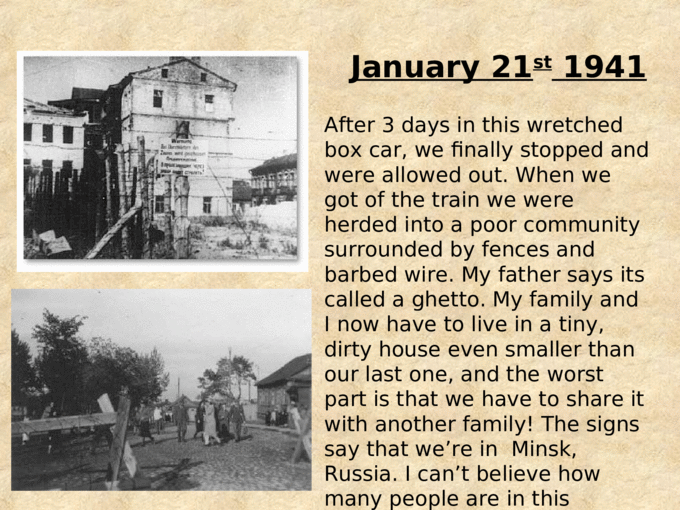 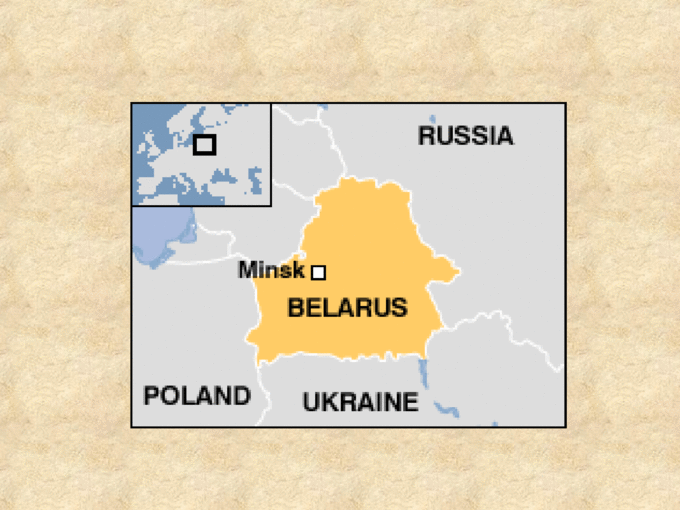 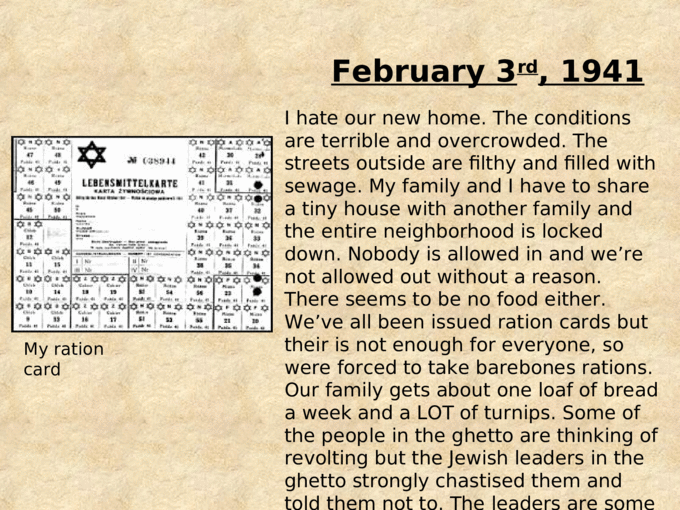 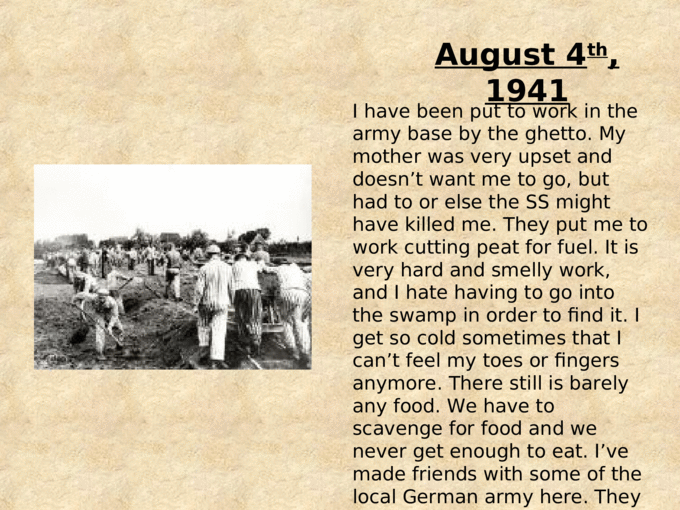 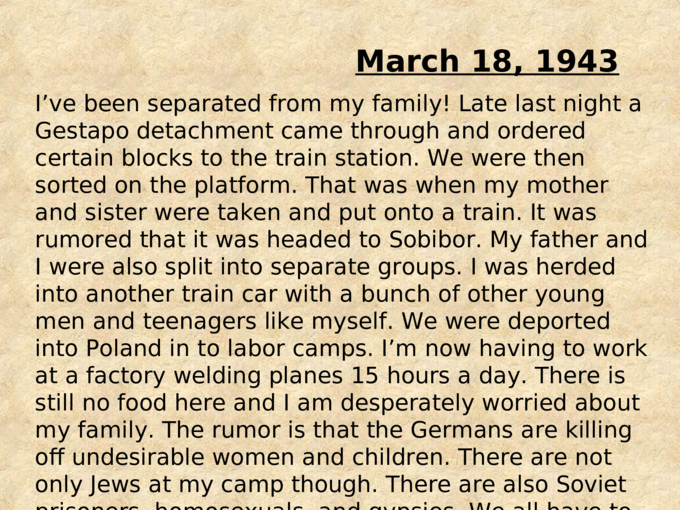 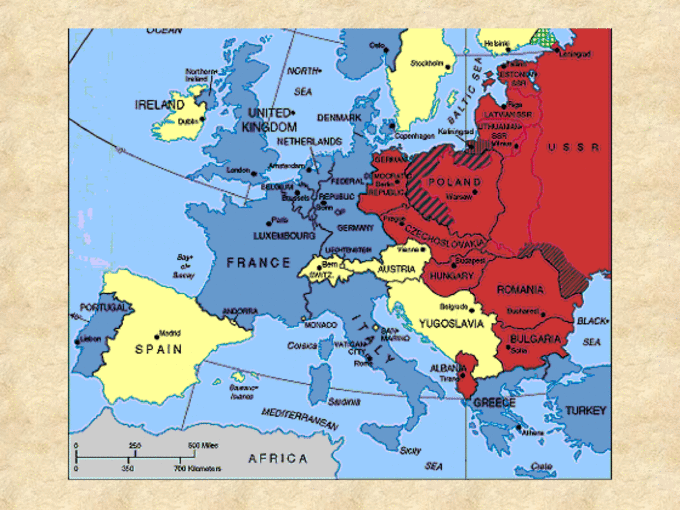 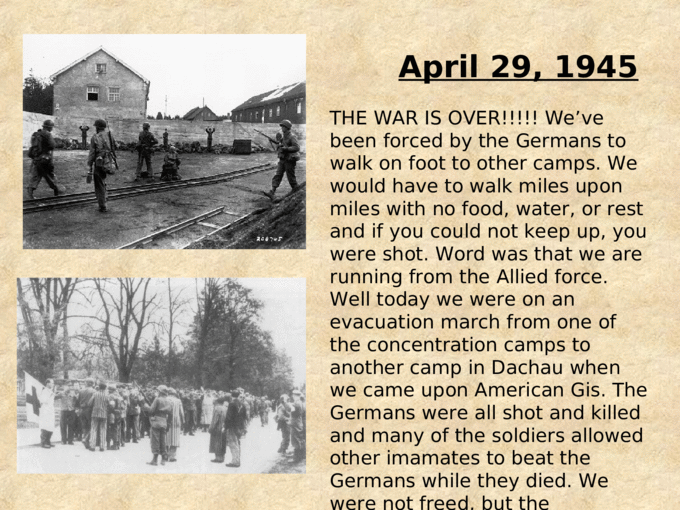 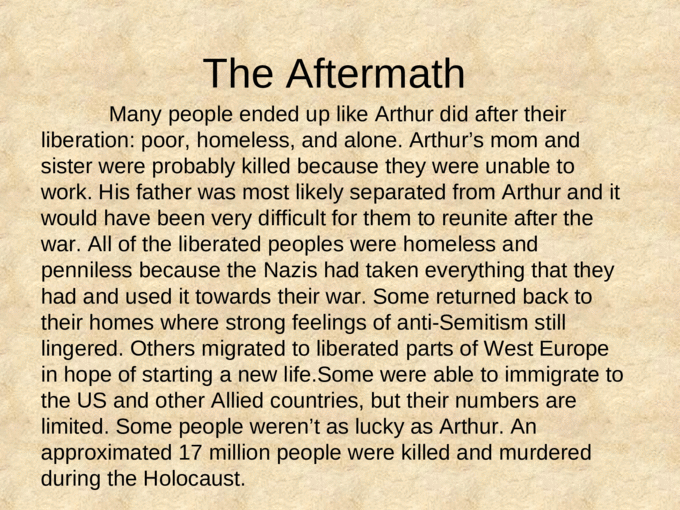 A presentation on what the Holocaust may have been like for a child in WWII based on an ID card from the United States Holocaust Muesem. The story is mostly fictional but the events and time periods are historical. To find this person's real story as stated by the muesem website, go to www.ushmm.org

The HolocaustThrough the Eyes of Arthur Menke

December 28, 1932My mother gave me this journal for Hanukah this year, and I promised her I would use it. I am five years old and my family and I live in Hamburg, Germany. We go to the synagogue every Saturday in the middle of town and I go to the Hamburg school for Boys every week.. My sister goes to a girls school a block away from mine. My father owns his own factory, making rubber stamps and selling them to other businesses. My mother helps run a local bakery by our house and she always brings us fresh Challah every

February 1st, 1933Two days ago, a man named Adolf Hitler was elected as Chancellor. My mom says a chancellor is like a king because he gets to make all of the laws. All of my friends in my neighborhood like Hitler and say that he will help save Germany. The newspapers all say that he will bring Germany out of the depression and make Germany strong again. My dad says that Hitler is bad though because he is part of the National Socialist German Workers Party, or the Nazis. He says that they dont like

July 5, 1933Lately some odd things have been happening in Germany. Our teacher told us that Hitler was taking away everybodys basic rights and that he was going to take over all of Germany. The next day men from Hitlers special police came and arrested him! The next day a new mean teacher came in and told us that he would be our new teacher. He always makes fun of me in class for being Jewish. My mom and dad told me to stay away from all of the SS and Gestapo on the streets because they are afraid that they will try and get me in trouble. I once tried

February 4th, 1934I feel like my family and I have become targets in our neighborhood. Our house has been vandalized and people have gone and painted the word JEW in big red letters on the front of my moms bakery. In my classroom then my teacher is always trying to make fun of me and he always tells me how Im stupid compared to everyone else. Even my friends have started acting weird, and they wont pick me for their baseball teams anymore. I used to be able to stay out and play with my sister until after dark but

This is a picture of the Jewish clothes store we used to shop at. Someone threw rocks through the windows.

November 10th 1934My dad says that the Nazis are making me and my sister go to a new Jewish school. Our principal told us that we couldnt go to regular school anymore because we were dragging down the rest of students who were superior to us. I didnt care that we had to go to a new school at first because then I wouldnt have to see my mean teacher anymore, but now I wish I was at my old school. I dont know

February 12, 1935My family is going through a very hard time. The government now makes us all carry around an ID card that has a big J on the front that stands for Jew. My mom says that if we lose our cards or forget them when we go out, we can be arrested! We also have to sew Jewish stars on our clothes. The government even made us change our names. My mom and sister now have to have Sara as their middle name, and my dad and I have to use Israel for our middle names. Our friends wont even talk to us anymore just because we are Jewish! To make it even worse the Nazis put huge signs up on my mothers bakery that say JEW in the window. She says that all sorts of people used buy their bread, but now their only customers are other Jews. We also arent allowed to go into certain

September 20th 1935My father says that we have to move. We dont have to go far, just to the other side of town to a smaller and older house. The Nazis say we have to give up our house because we are a danger to the superior race that makes up most of our neighborhood. Our new neighborhood is made up mostly of middle-class Jewish. Its actually ok, because at least now I have other kids to play with. I still liked our lives before Hitler though. My dad stopped reading the national paper last week because all it did was make fun of the Jewish people and other undesirables. My dad only

November 10th, 1938The last few days were the scariest of my entire life. People around my neighborhood called it Kristallnacht, or the night of the breaking glass. Many synagogues were burned although ours was just looted and desecrated. German storm troopers set fire to Jewish homes and ransacked others. My mothers bakery was totally destroyed and burned, along with all of the other Jewish shops in the area. Men were rioting in the streets and even killed a Jewish man who was outside trying to save his business from being destroyed! Other German troops came through our neighborhoods and told us through loudspeakers that were not allowed to leave our homes, and that all Jewish activities were indefinitely suspended. My parents made us go hide down in the cellar during the riots, but he let us come back into the house after everyone went away. He told us that the Germans stooped all of the Jewish newspapers and mail, and that we werent allowed back to school. Mother told us later that his factory had been vandalized during the night and the Nazis took away the factory from him. The next day

January 19th, 1941Im writing this on the train the Germans ordered us to board. Late last night the German SS ordered us to pack our belongings and report to the Hamburg train station by 6:00 AM. We all quickly packed and got their, only to find THOUSANDS of other Jews. They pushed us into the trains and told us that we would be shot if we jumped off. This train is the one of the most miserable places I have ever been. Weve been stuffed into a small boxcar with about a hundred other Jews. There is no food or water and no bathrooms. Its smells terrible in

January 21st 1941After 3 days in this wretched box car, we finally stopped and were allowed out. When we got of the train we were herded into a poor community surrounded by fences and barbed wire. My father says its called a ghetto. My family and I now have to live in a tiny, dirty house even smaller than our last one, and the worst part is that we have to share it with another family! The signs say that were in Minsk, Russia. I cant believe how many people are in this

February 3rd, 1941I hate our new home. The conditions are terrible and overcrowded. The streets outside are filthy and filled with sewage. My family and I have to share a tiny house with another family and the entire neighborhood is locked down. Nobody is allowed in and were not allowed out without a reason. There seems to be no food either. Weve all been issued ration cards but their is not enough for everyone, so were forced to take barebones rations. Our family gets about one loaf of bread a week and a LOT of turnips. Some of the people in the ghetto are thinking of revolting but the Jewish leaders in the ghetto strongly chastised them and told them not to. The leaders are some

I have been put to work in the army base by the ghetto. My mother was very upset and doesnt want me to go, but had to or else the SS might have killed me. They put me to work cutting peat for fuel. It is very hard and smelly work, and I hate having to go into the swamp in order to find it. I get so cold sometimes that I cant feel my toes or fingers anymore. There still is barely any food. We have to scavenge for food and we never get enough to eat. Ive made friends with some of the local German army here. They

March 18, 1943Ive been separated from my family! Late last night a Gestapo detachment came through and ordered certain blocks to the train station. We were then sorted on the platform. That was when my mother and sister were taken and put onto a train. It was rumored that it was headed to Sobibor. My father and I were also split into separate groups. I was herded into another train car with a bunch of other young men and teenagers like myself. We were deported into Poland in to labor camps. Im now having to work at a factory welding planes 15 hours a day. There is still no food here and I am desperately worried about my family. The rumor is that the Germans are killing off undesirable women and children. There are not only Jews at my camp though. There are also Soviet

April 29, 1945THE WAR IS OVER!!!!! Weve been forced by the Germans to walk on foot to other camps. We would have to walk miles upon miles with no food, water, or rest and if you could not keep up, you were shot. Word was that we are running from the Allied force. Well today we were on an evacuation march from one of the concentration camps to another camp in Dachau when we came upon American Gis. The Germans were all shot and killed and many of the soldiers allowed other imamates to beat the Germans while they died. We were not freed, but the

The AftermathMany people ended up like Arthur did after their liberation: poor, homeless, and alone. Arthurs mom and sister were probably killed because they were unable to work. His father was most likely separated from Arthur and it would have been very difficult for them to reunite after the war. All of the liberated peoples were homeless and penniless because the Nazis had taken everything that they had and used it towards their war. Some returned back to their homes where strong feelings of anti-Semitism still lingered. Others migrated to liberated parts of West Europe in hope of starting a new life.Some were able to immigrate to the US and other Allied countries, but their numbers are limited. Some people werent as lucky as Arthur. An approximated 17 million people were killed and murdered during the Holocaust.