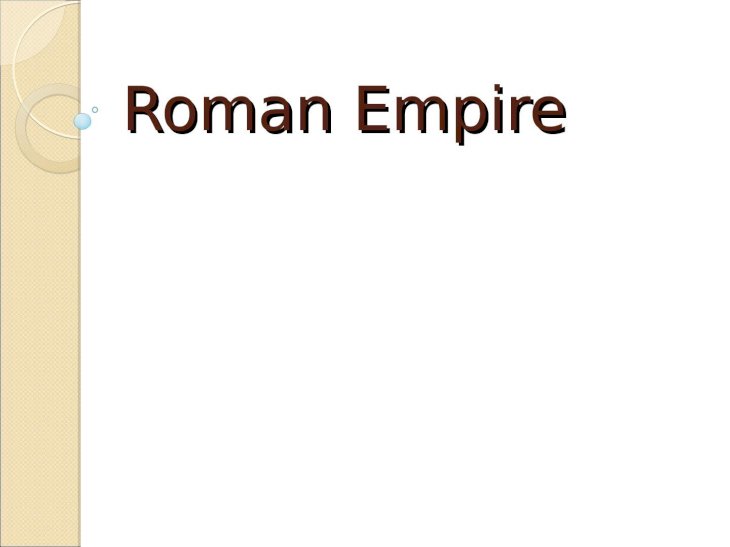 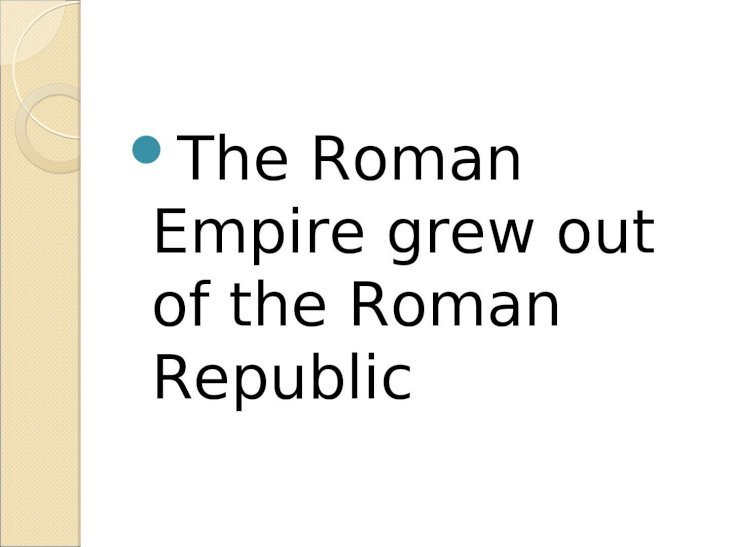 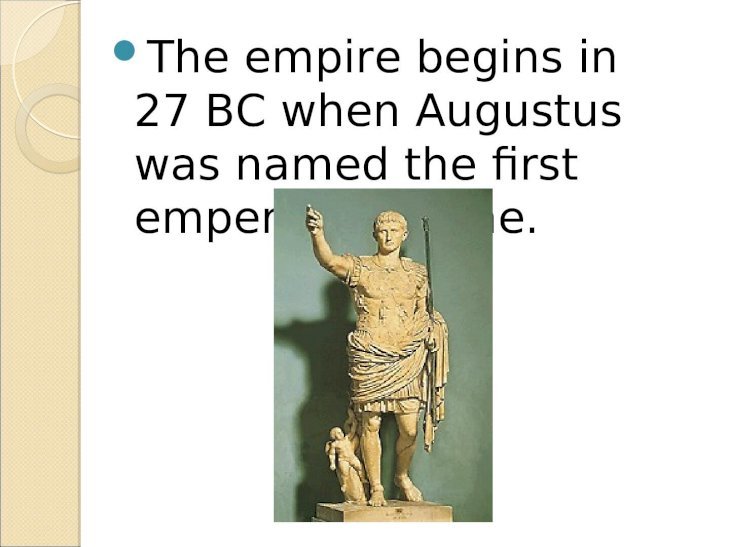 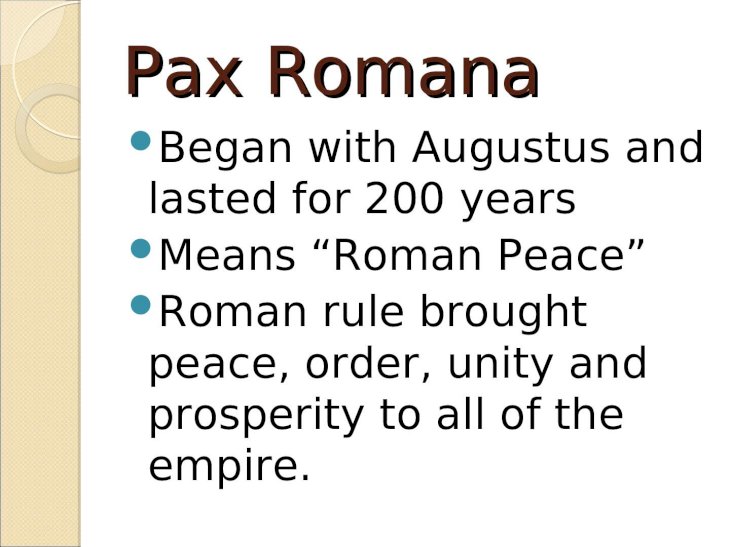 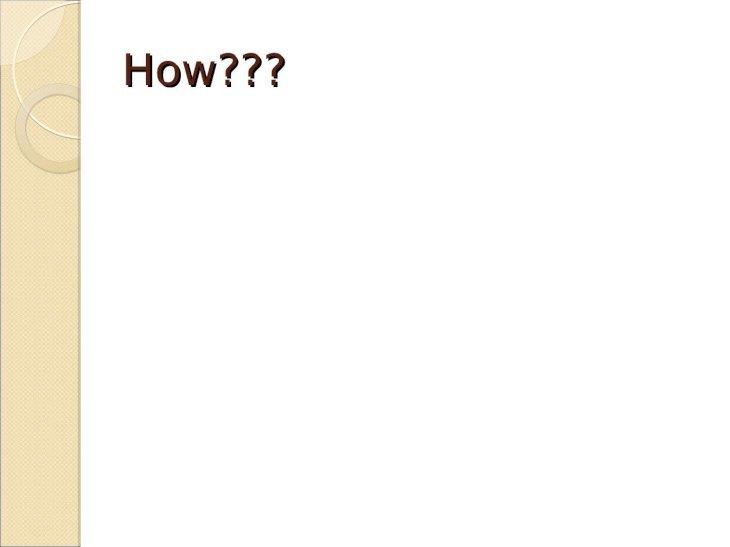 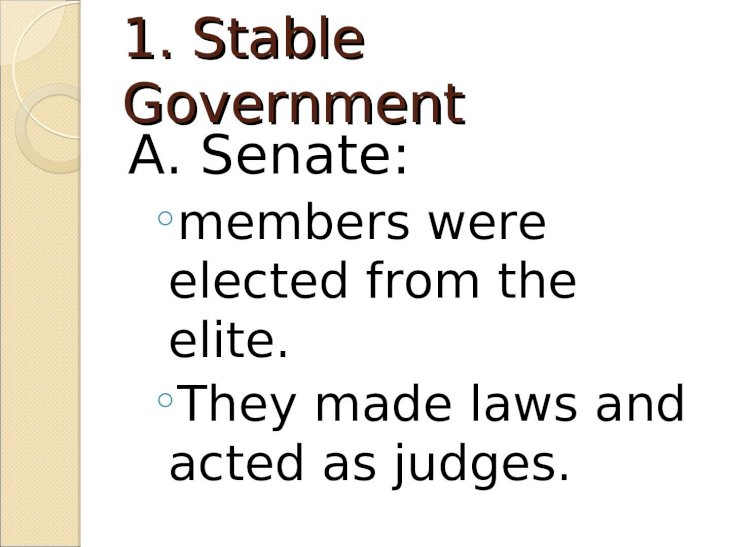 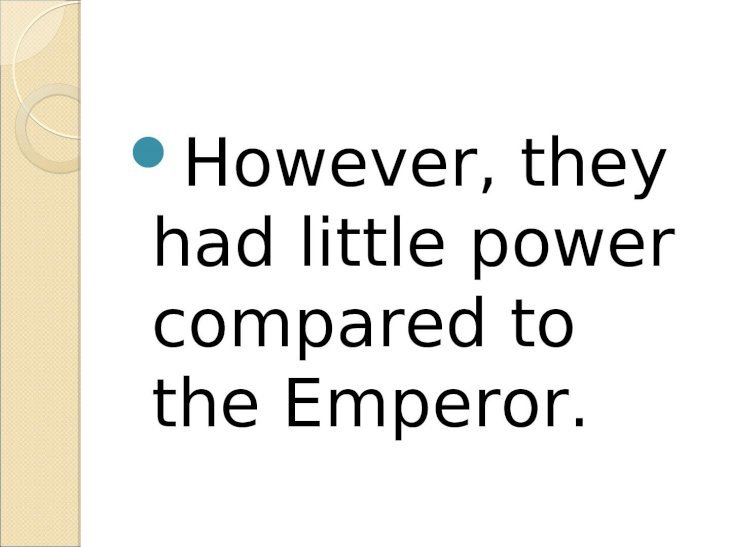 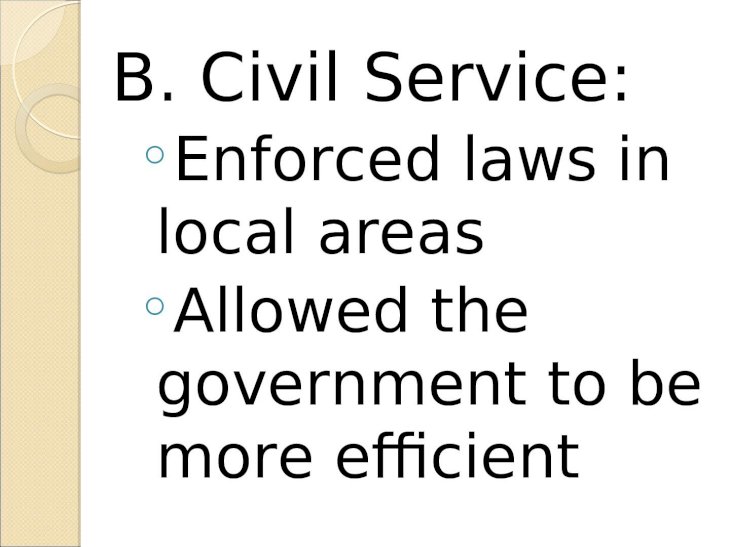 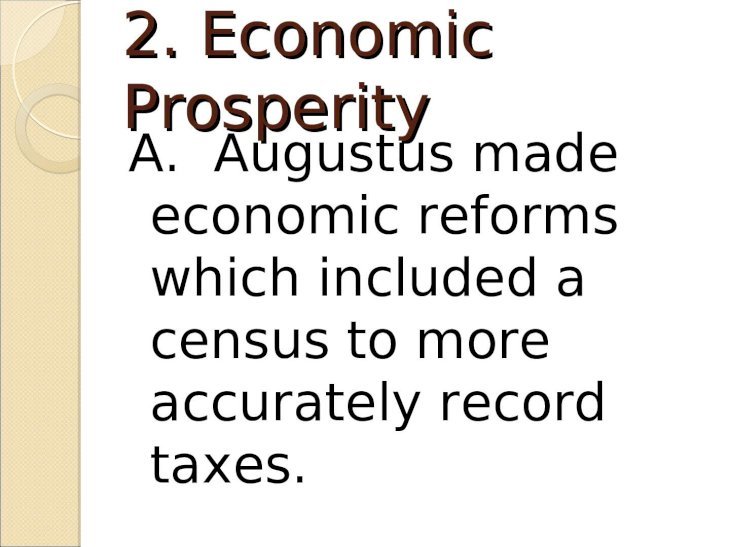 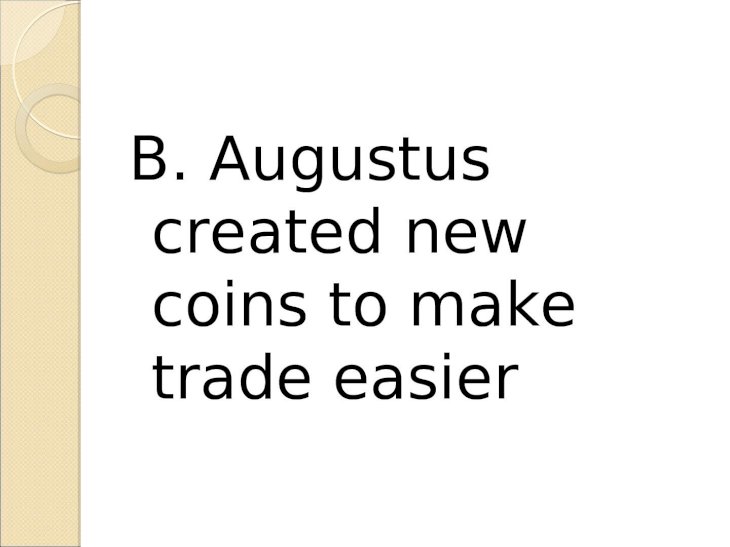 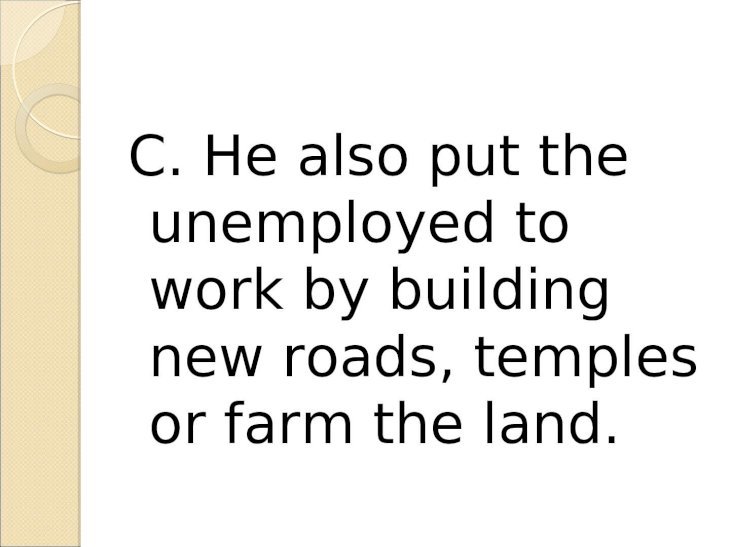 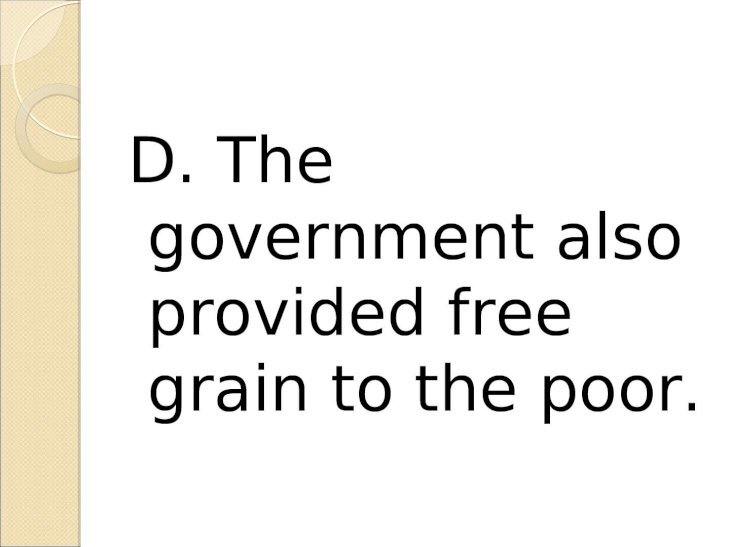 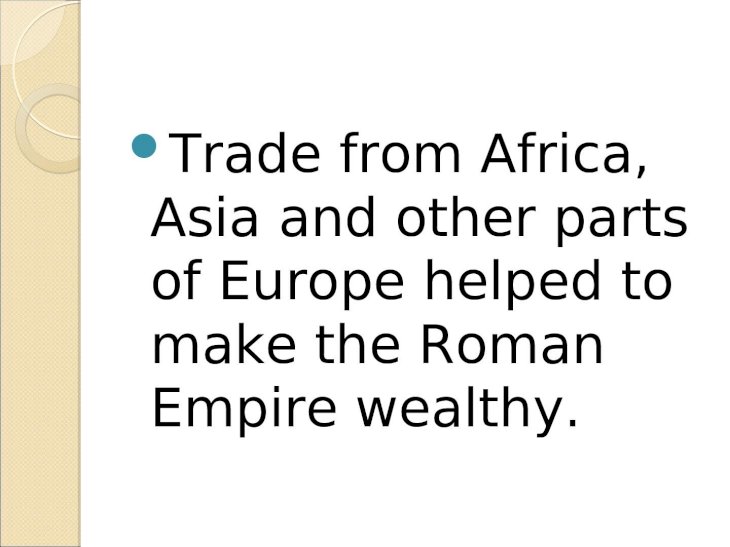 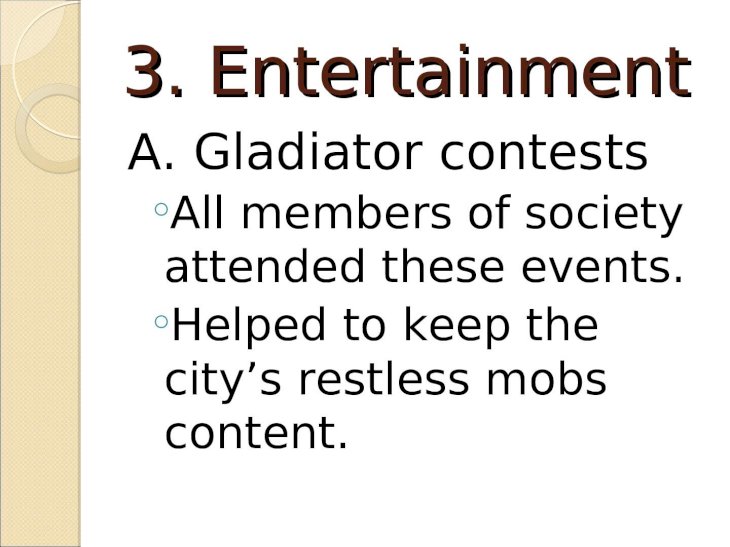 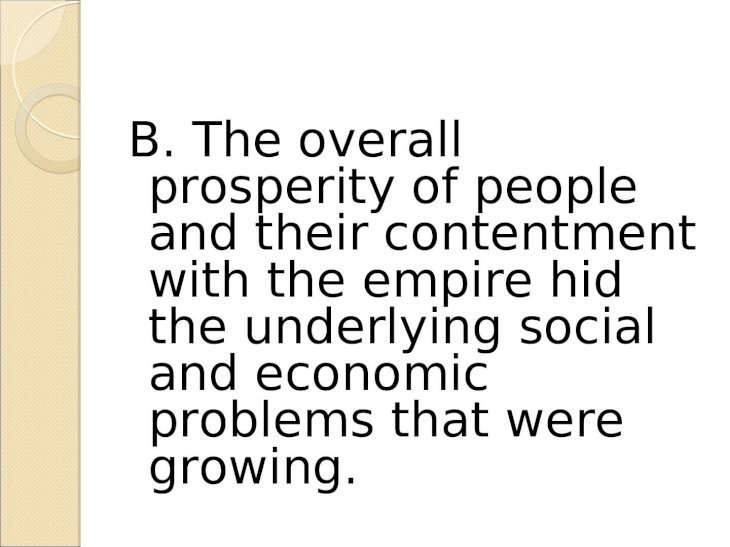 Roman Empire Slide 2 The Roman Empire grew out of the Roman Republic Slide 3 The empire begins in 27 BC when Augustus was named the first emperor of Rome. Slide 4 Pax Romana Began with Augustus and lasted for 200 years Means Roman Peace Roman rule brought peace, order, unity and prosperity to all of the empire. Slide 5 How??? Slide 6 1. Stable Government A. Senate: members were elected from the elite. They made laws and acted as judges. Slide 7 However, they had little power compared to the Emperor. Slide 8 B. Civil Service: Enforced laws in local areas Allowed the government to be more efficient Slide 9 2. Economic Prosperity A. Augustus made economic reforms which included a census to more accurately record taxes. Slide 10 B. Augustus created new coins to make trade easier Slide 11 C. He also put the unemployed to work by building new roads, temples or farm the land. Slide 12 D. The government also provided free grain to the poor. Slide 13 Trade from Africa, Asia and other parts of Europe helped to make the Roman Empire wealthy. Slide 14 3. Entertainment A. Gladiator contests All members of society attended these events. Helped to keep the citys restless mobs content. Slide 15 B. The overall prosperity of people and their contentment with the empire hid the underlying social and economic problems that were growing.

II. Roman Empire. A. Republic Collapses As Rome grew its Republican form of government became unstable As Rome grew the gap between rich and poor grew