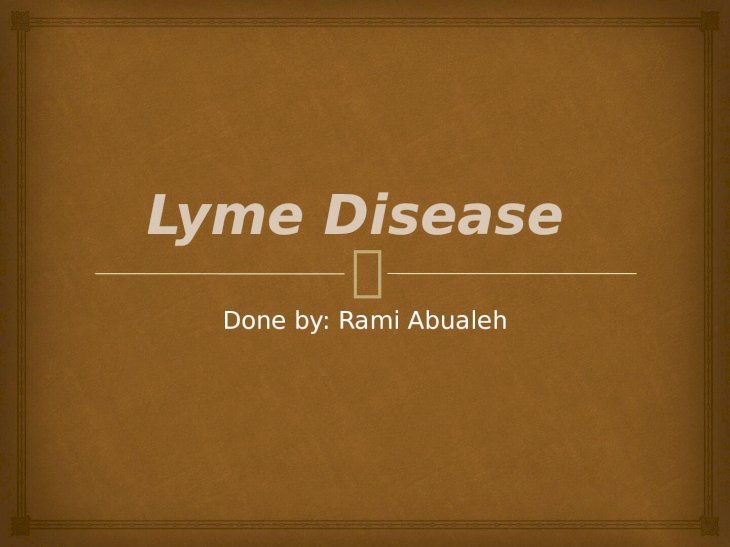 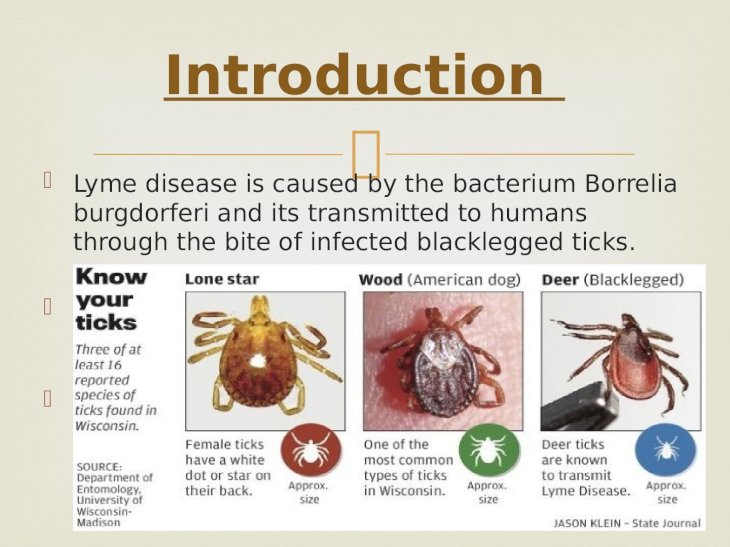 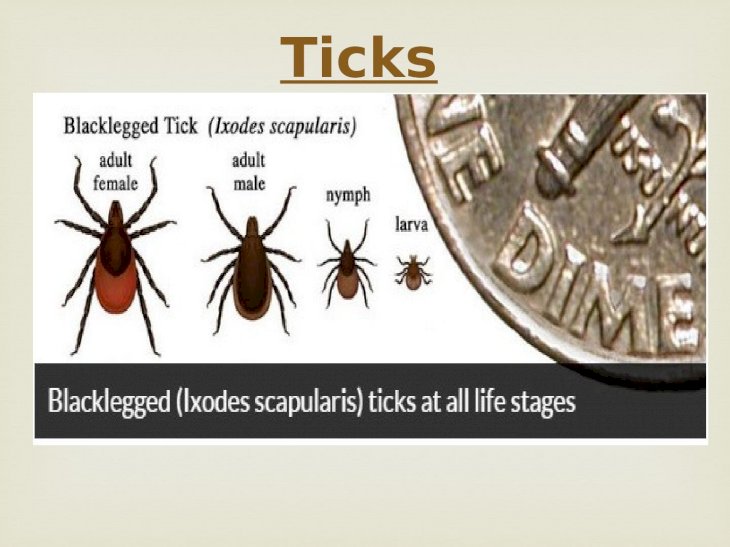 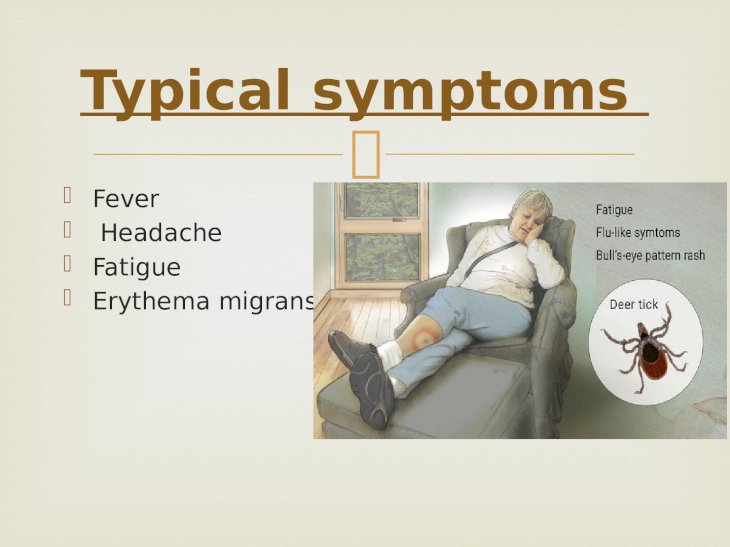 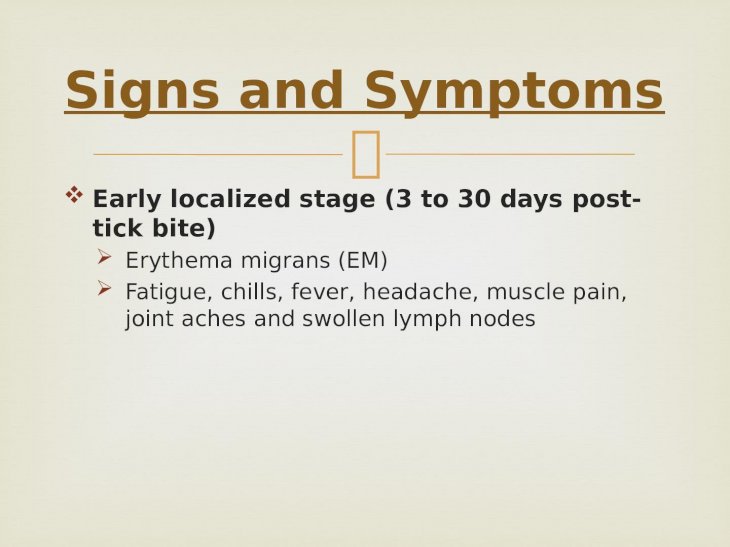 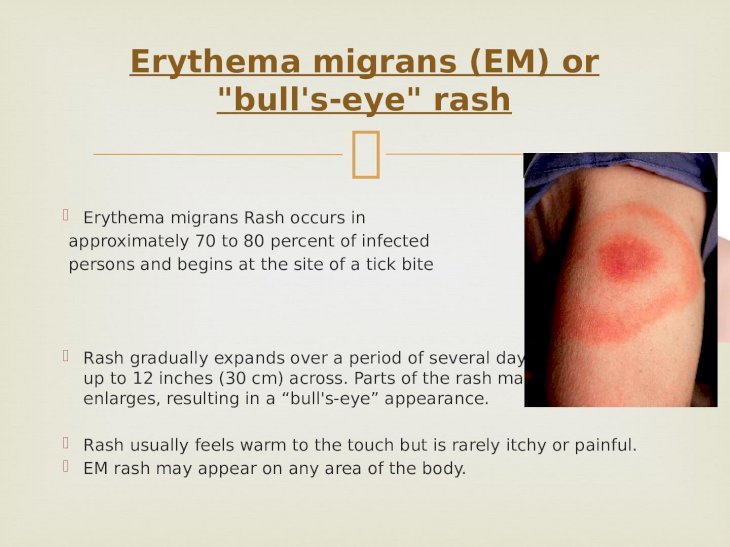 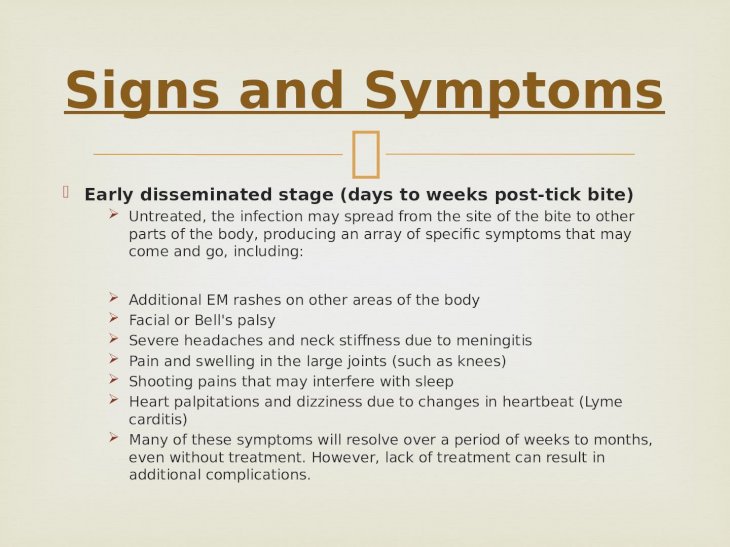 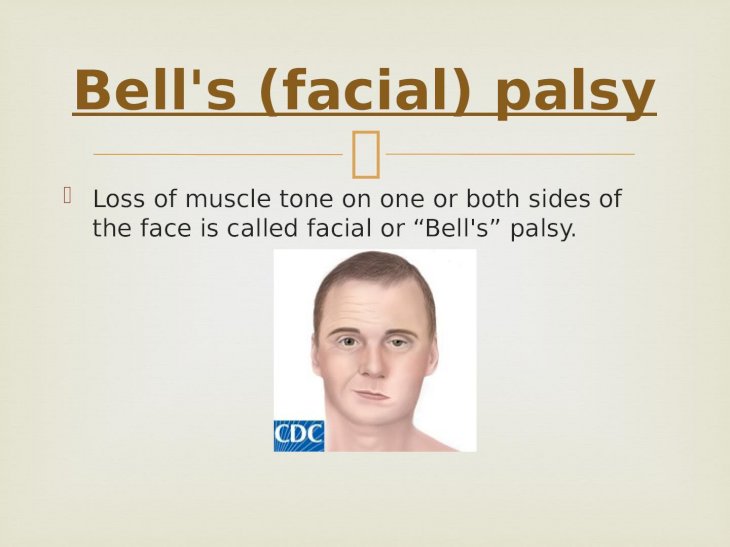 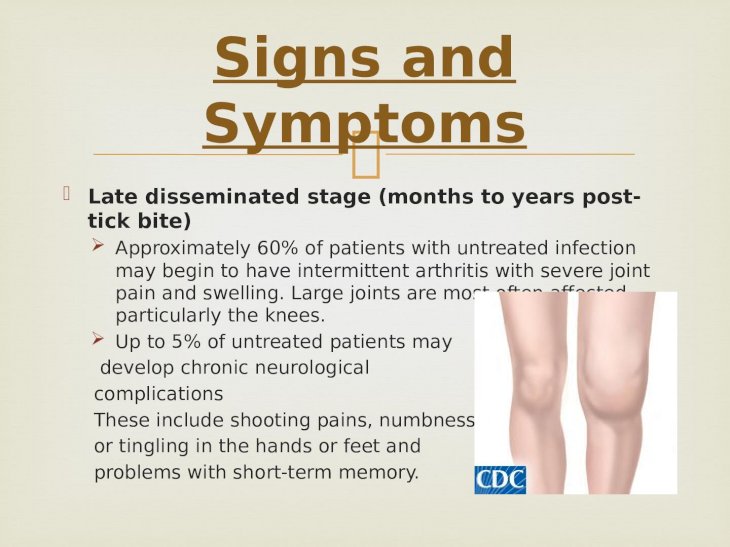 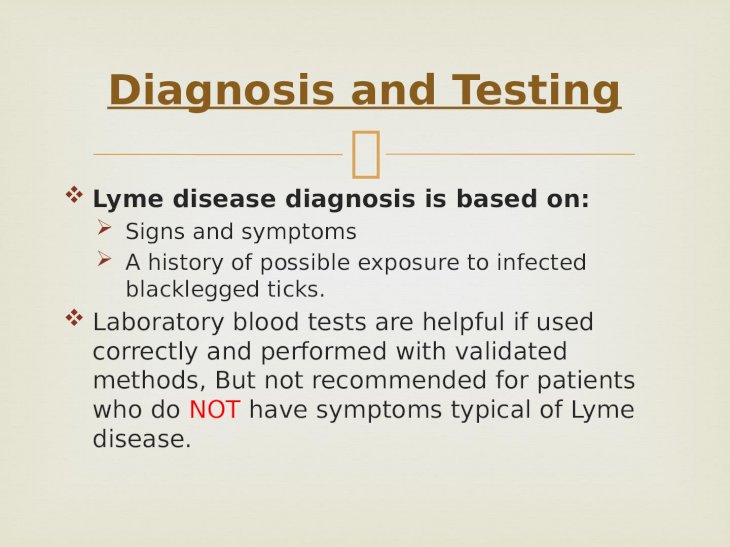 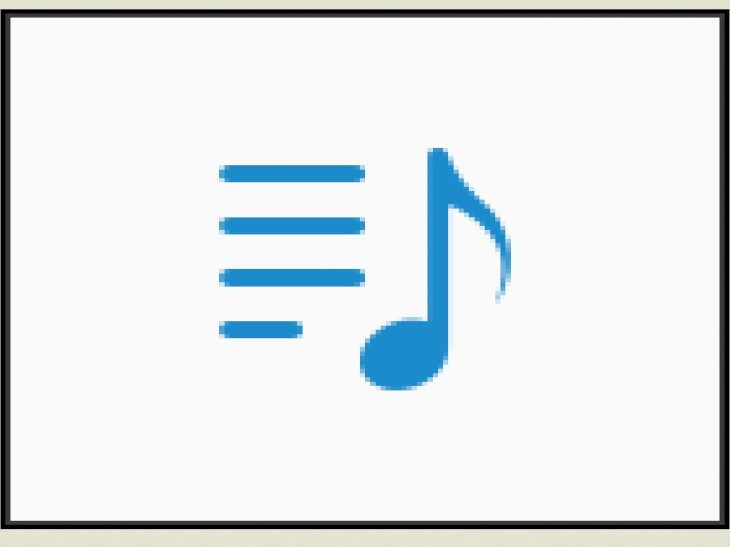 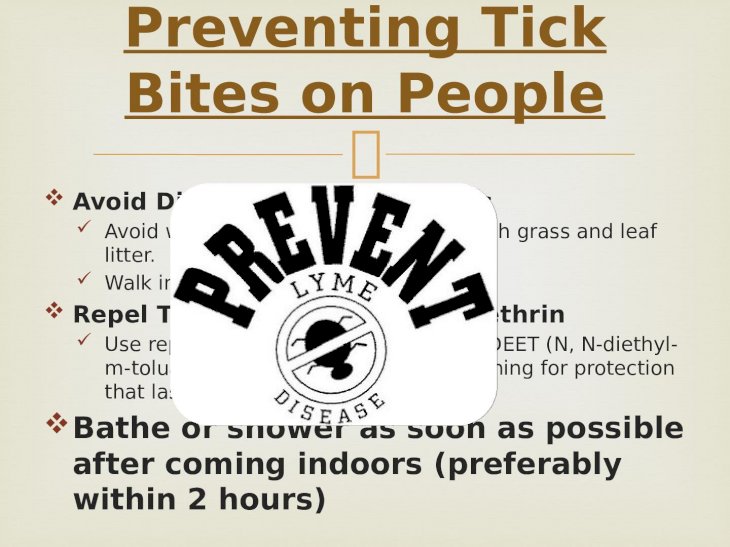 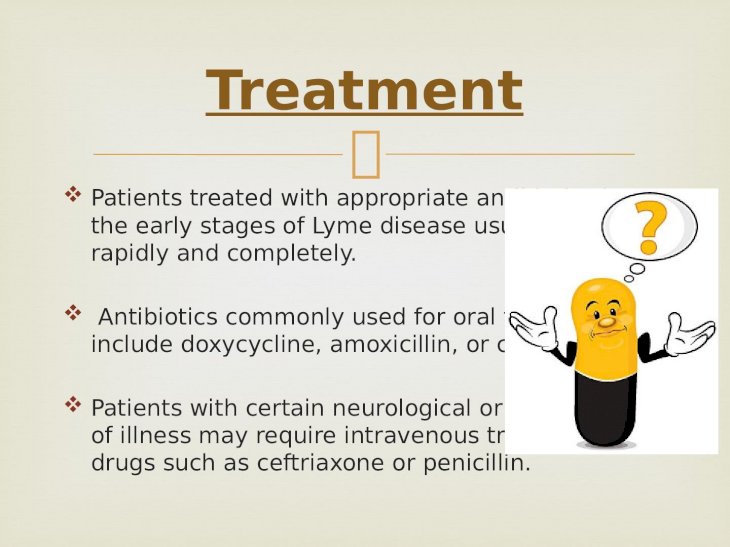 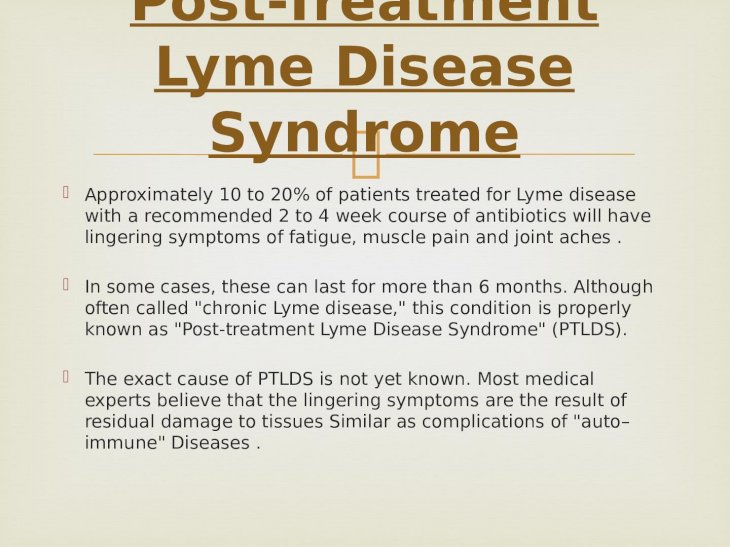 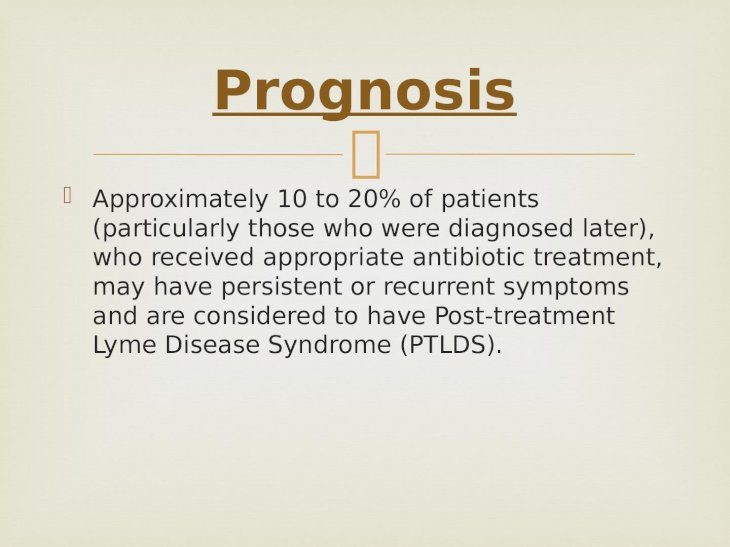 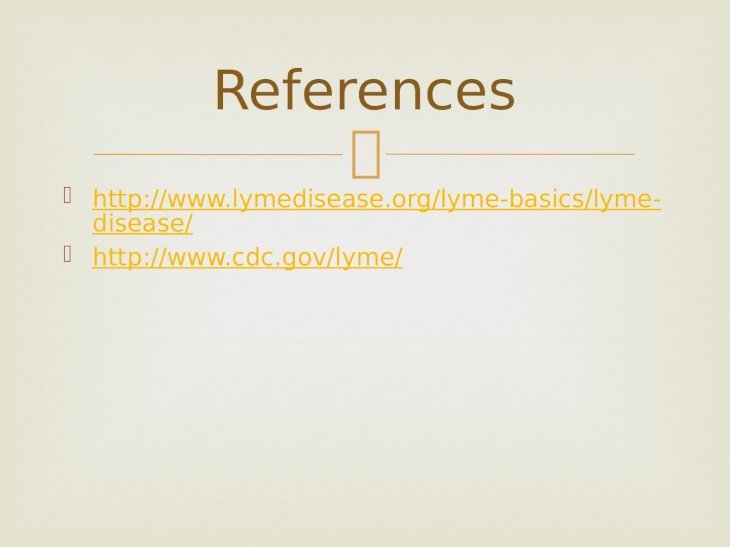 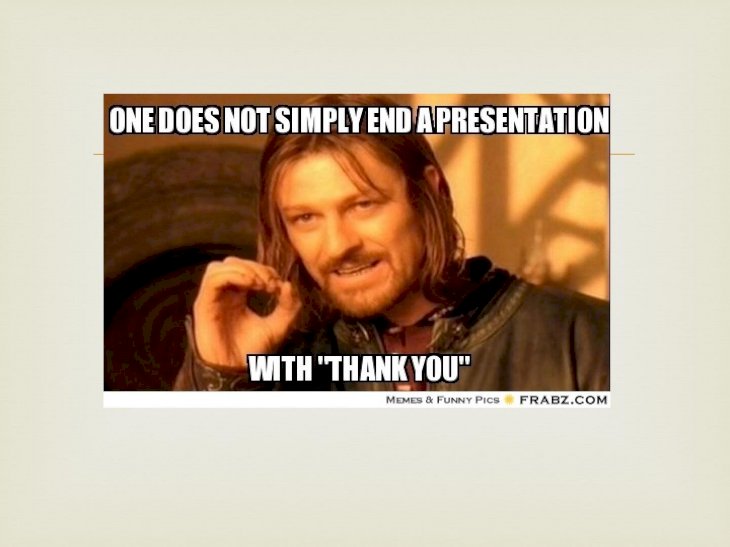 Lyme disease is caused by the bacterium Borrelia burgdorferi and its transmitted to humans through the bite of infected blacklegged ticks.

If left untreated, infection can spread to joints, the heart, and the nervous system.

Rash gradually expands over a period of several days, and can reach up to 12 inches (30 cm) across. Parts of the rash may clear as it enlarges, resulting in a bull's-eye appearance.

Rash usually feels warm to the touch but is rarely itchy or painful.EM rash may appear on any area of the body.Erythema migrans (EM) or "bull's-eye" rash

Early disseminated stage (days to weeks post-tick bite)Untreated, the infection may spread from the site of the bite to other parts of the body, producing an array of specific symptoms that may come and go, including:

Additional EM rashes on other areas of the bodyFacial or Bell's palsy Severe headaches and neck stiffness due to meningitis Pain and swelling in the large joints (such as knees)Shooting pains that may interfere with sleepHeart palpitations and dizziness due to changes in heartbeat (Lyme carditis)Many of these symptoms will resolve over a period of weeks to months, even without treatment. However, lack of treatment can result in additional complications.Signs and Symptoms

Loss of muscle tone on one or both sides of the face is called facial or Bell's palsy.

Late disseminated stage (months to years post-tick bite)Approximately 60% of patients with untreated infection may begin to have intermittent arthritis with severe joint pain and swelling. Large joints are most often affected, particularly the knees. Up to 5% of untreated patients may develop chronic neurological complicationsThese include shooting pains, numbnessor tingling in the hands or feet and problems with short-term memory.

Lyme disease diagnosis is based on:Signs and symptomsA history of possible exposure to infected blacklegged ticks. Laboratory blood tests are helpful if used correctly and performed with validated methods, But not recommended for patients who do NOT have symptoms typical of Lyme disease.Diagnosis and Testing

Avoid Direct Contact with TicksAvoid wooded and bushy areas with high grass and leaf litter.Walk in the center of trails.Repel Ticks with DEET or PermethrinUse repellents that contain 20 to 30% DEET (N, N-diethyl-m-toluamide) on exposed skin and clothing for protection that lasts up to several hours. Bathe or shower as soon as possible after coming indoors (preferably within 2 hours)

Patients with certain neurological or cardiac forms of illness may require intravenous treatment with drugs such as ceftriaxone or penicillin.Treatment

Approximately 10 to 20% of patients treated for Lyme disease with a recommended 2 to 4 week course of antibiotics will have lingering symptoms of fatigue, muscle pain and joint aches .

In some cases, these can last for more than 6 months. Although often called "chronic Lyme disease," this condition is properly known as "Post-treatment Lyme Disease Syndrome" (PTLDS).

The exact cause of PTLDS is not yet known. Most medical experts believe that the lingering symptoms are the result of residual damage to tissues Similar as complications of "autoimmune" Diseases .

Approximately 10 to 20% of patients (particularly those who were diagnosed later), who received appropriate antibiotic treatment, may have persistent or recurrent symptoms and are considered to have Post-treatment Lyme Disease Syndrome (PTLDS). Prognosis

Lyme Disease in California Document... WHAT IS LYME DISEASE? Lyme disease is caused by a spirochete

Lyme Disease LYME DISEASE SYMPTOMS The confusion about Lyme disease symptoms is vast. At this point,