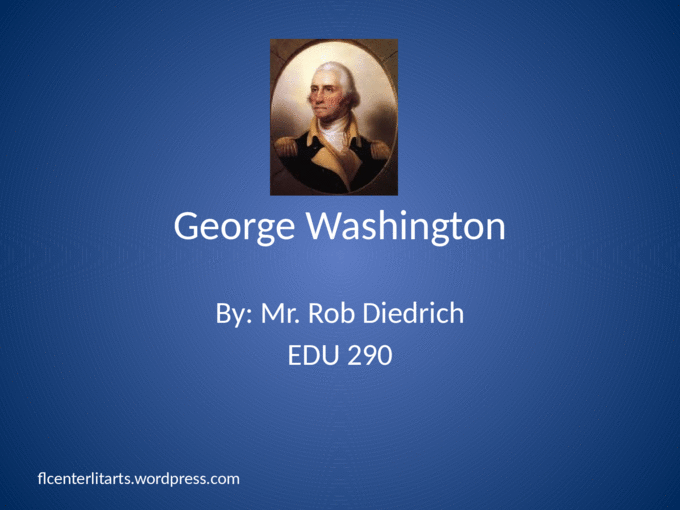 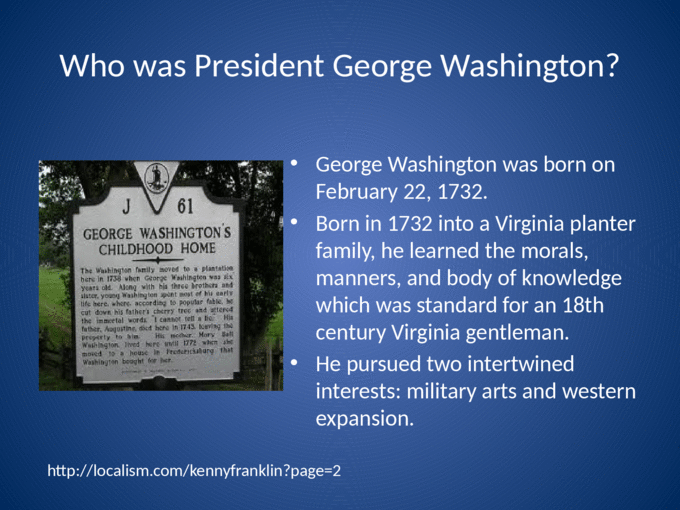 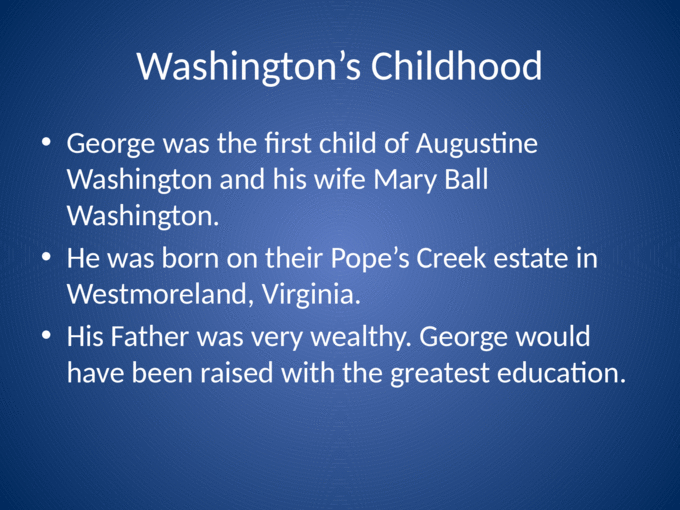 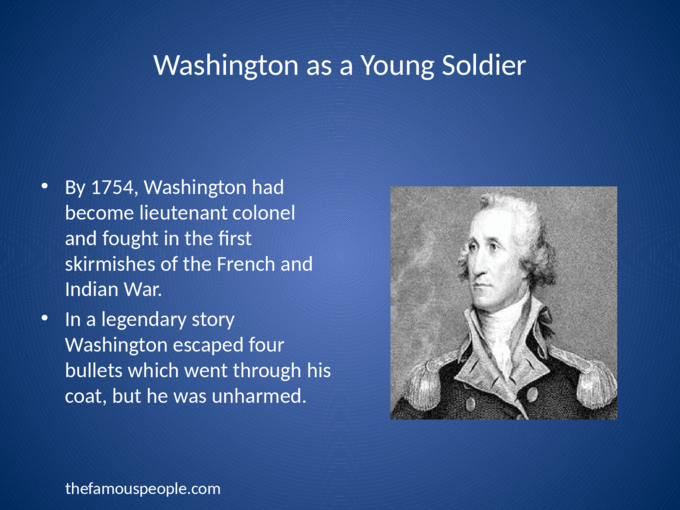 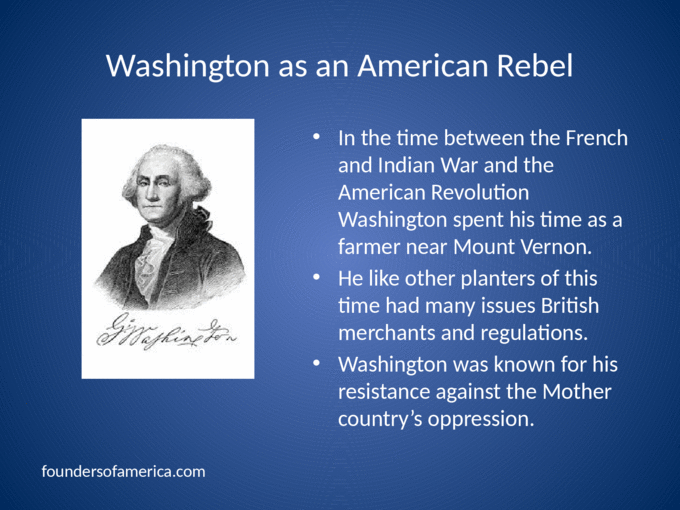 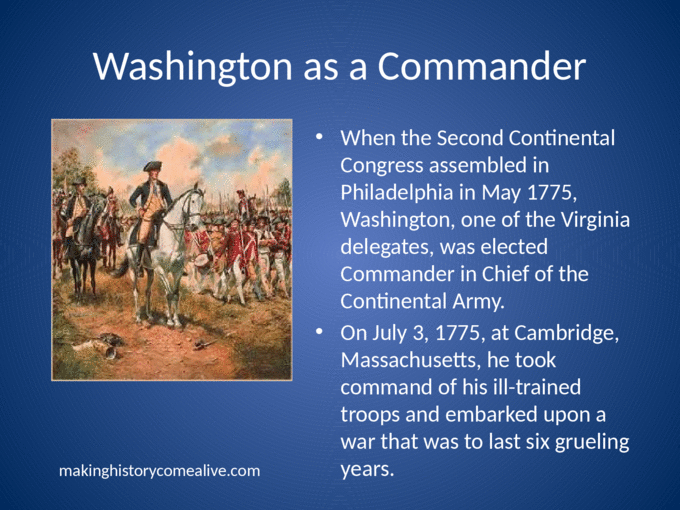 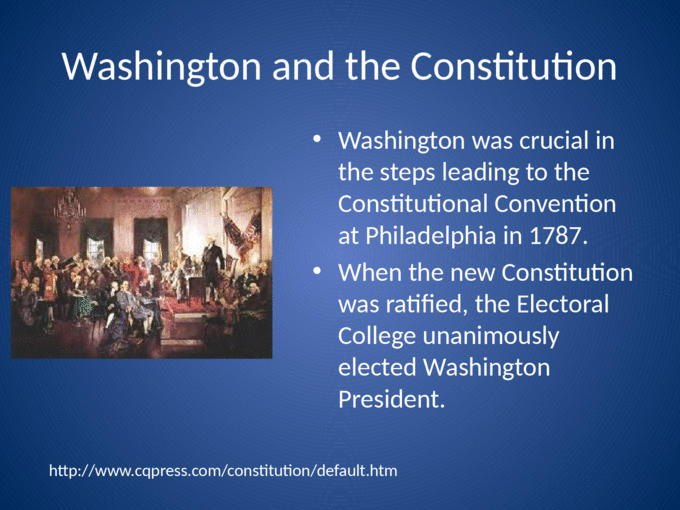 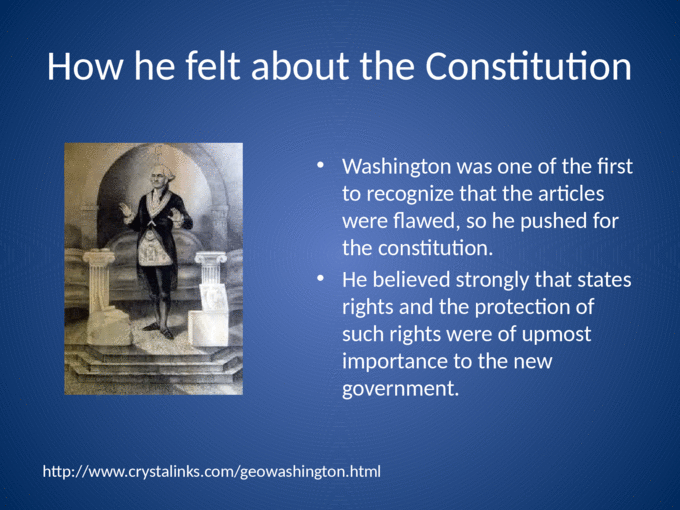 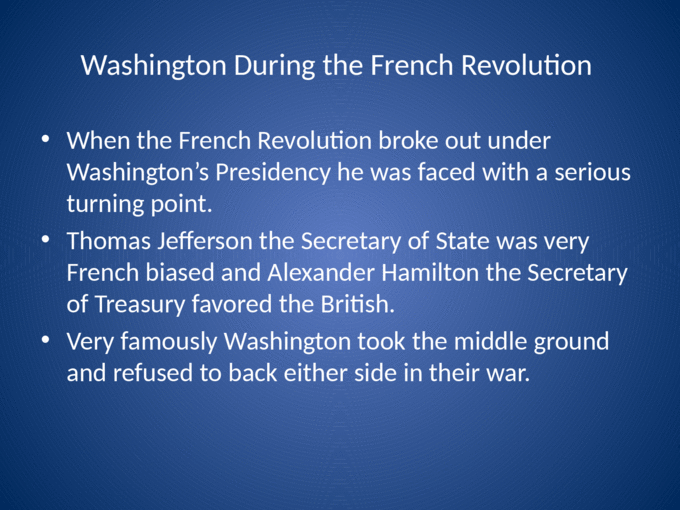 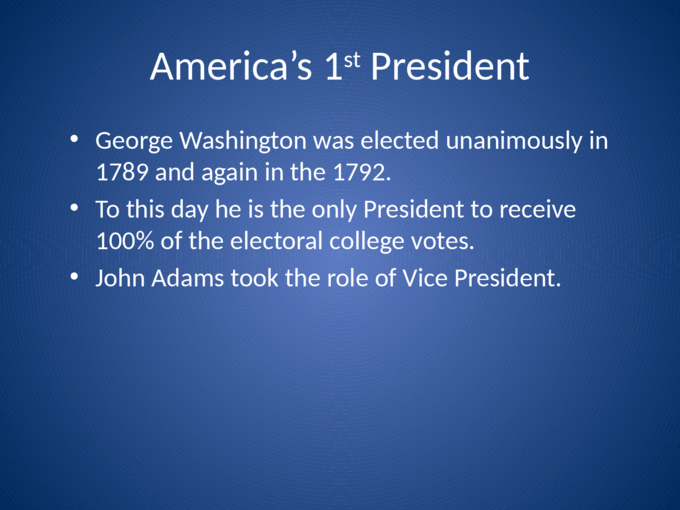 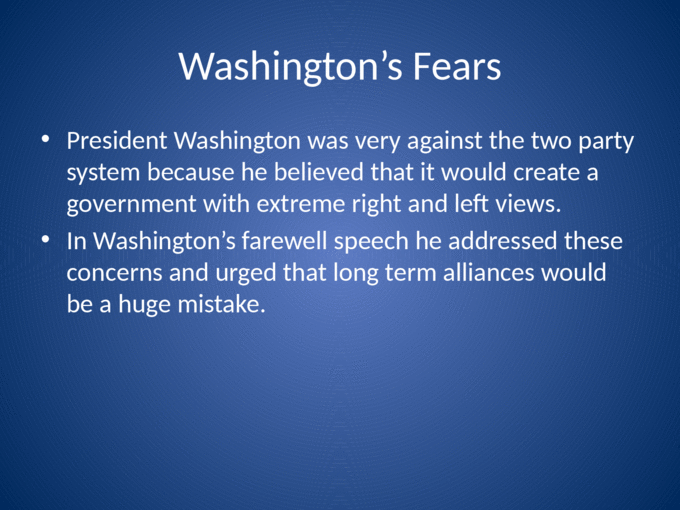 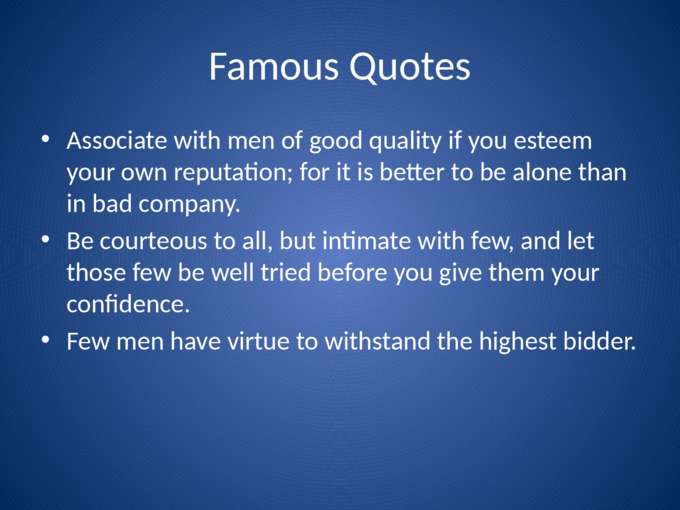 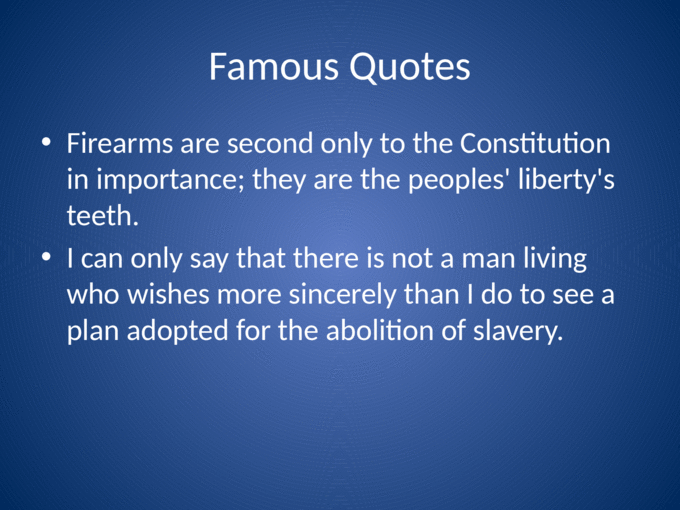 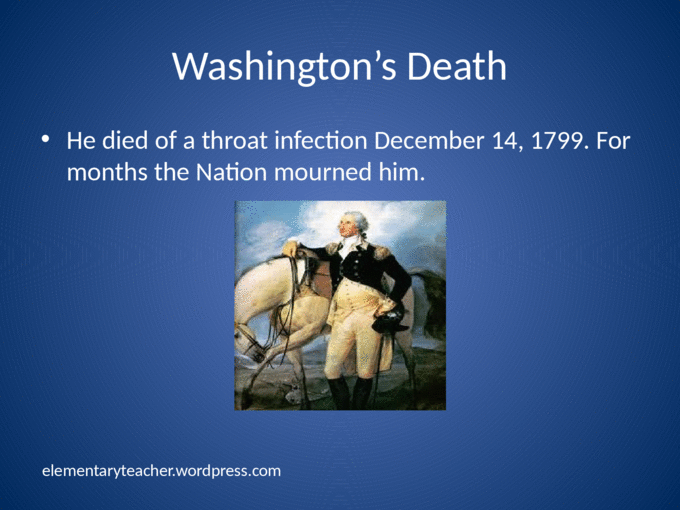 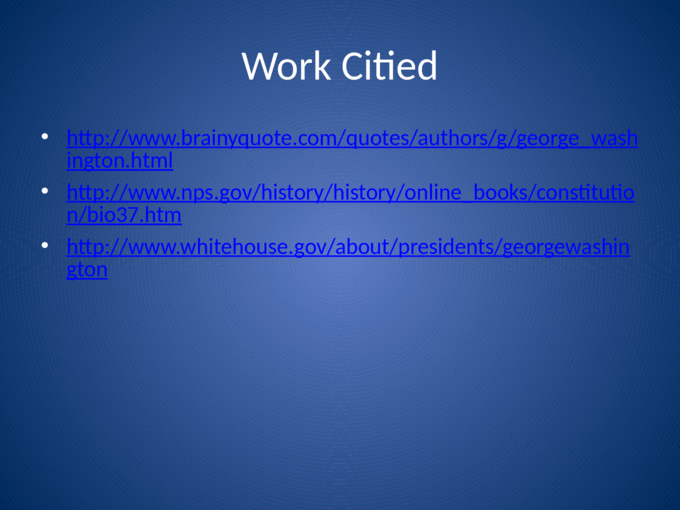 2. Who was President George Washington?
George Washington was born on February 22, 1732.
Born in 1732 into a Virginia planter family, he learned the morals, manners, and body of knowledge which was standard for an 18th century Virginia gentleman.
He pursued two intertwined interests: military arts and western expansion.
http://localism.com/kennyfranklin?page=2
3. Washingtons Childhood
George was the first child of Augustine Washington and his wife Mary Ball Washington.
He was born on their Popes Creek estate in Westmoreland, Virginia.
His Father was very wealthy. George would have been raised with the greatest education.
4. Washington as a Young Soldier
By 1754, Washington had become lieutenant colonel and fought in the first skirmishes of the French and Indian War.
In a legendary story Washington escaped four bullets which went through his coat, but he was unharmed.
thefamouspeople.com
5. Washington as an American Rebel
In the time between the French and Indian War and the American Revolution Washington spent his time as a farmer near Mount Vernon.
He like other planters of this time had many issues British merchants and regulations.
Washington was known for his resistance against the Mother countrys oppression.
foundersofamerica.com
6. Washington as a Commander
When the Second Continental Congress assembled in Philadelphia in May 1775, Washington, one of the Virginia delegates, was elected Commander in Chief of the Continental Army.
On July 3, 1775, at Cambridge, Massachusetts, he took command of his ill-trained troops and embarked upon a war that was to last six grueling years.
makinghistorycomealive.com
7. Washington and the Constitution
Washington was crucial in the steps leading to the Constitutional Convention at Philadelphia in 1787.
When the new Constitution was ratified, the Electoral College unanimously elected Washington President.
http://www.cqpress.com/constitution/default.htm
8. How he felt about the Constitution
Washington was one of the first to recognize that the articles were flawed, so he pushed for the constitution.
He believed strongly that states rights and the protection of such rights were of upmost importance to the new government.
http://www.crystalinks.com/geowashington.html
9. Washington During the French Revolution
When the French Revolution broke out under Washingtons Presidency he was faced with a serious turning point.
Thomas Jefferson the Secretary of State was very French biased and Alexander Hamilton the Secretary of Treasury favored the British.
Very famously Washington took the middle ground and refused to back either side in their war.
10. Americas 1st President
George Washington was elected unanimously in 1789 and again in the 1792.
To this day he is the only President to receive 100% of the electoral college votes.
John Adams took the role of Vice President.
11. Washingtons Fears
President Washington was very against the two party system because he believed that it would create a government with extreme right and left views.
In Washingtons farewell speech he addressed these concerns and urged that long term alliances would be a huge mistake.
12. Famous Quotes
Associate with men of good quality if you esteem your own reputation; for it is better to be alone than in bad company.
Be courteous to all, but intimate with few, and let those few be well tried before you give them your confidence.
Few men have virtue to withstand the highest bidder.
13. Famous Quotes
Firearms are second only to the Constitution in importance; they are the peoples' liberty's teeth.
I can only say that there is not a man living who wishes more sincerely than I do to see a plan adopted for the abolition of slavery.
14. Washingtons Death
He died of a throat infection December 14, 1799. For months the Nation mourned him.
elementaryteacher.wordpress.com
15. Work Citied
http://www.brainyquote.com/quotes/authors/g/george_washington.html
http://www.nps.gov/history/history/online_books/constitution/bio37.htm
http://www.whitehouse.gov/about/presidents/georgewashington