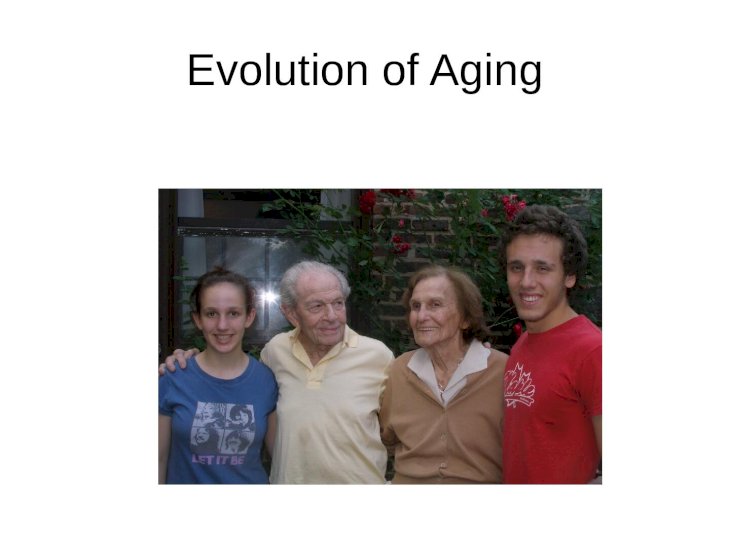 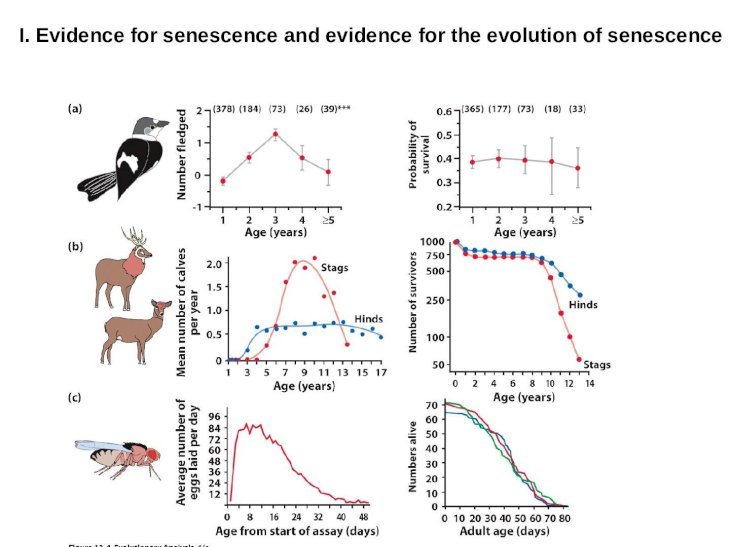 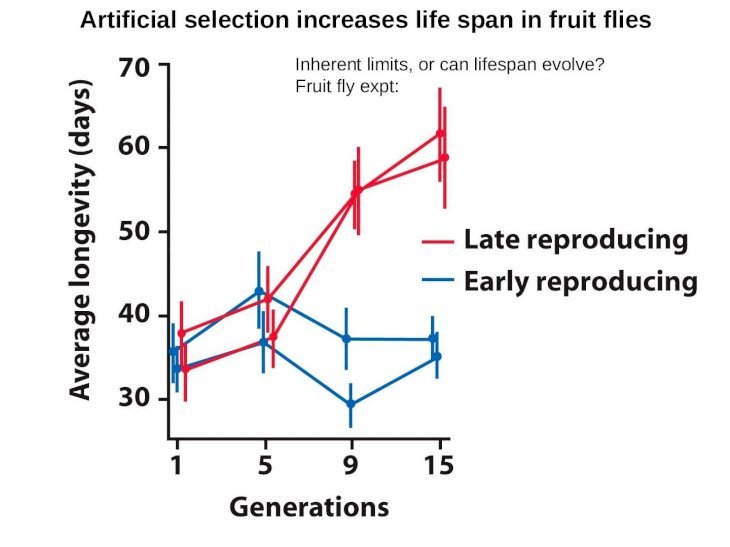 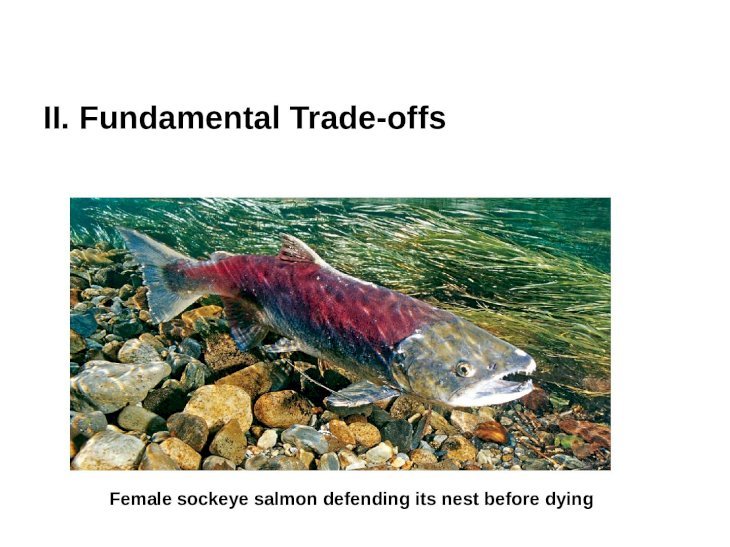 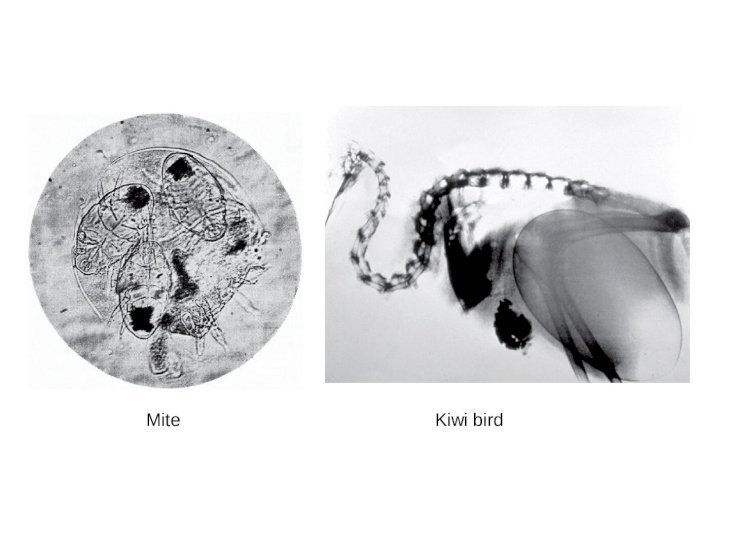 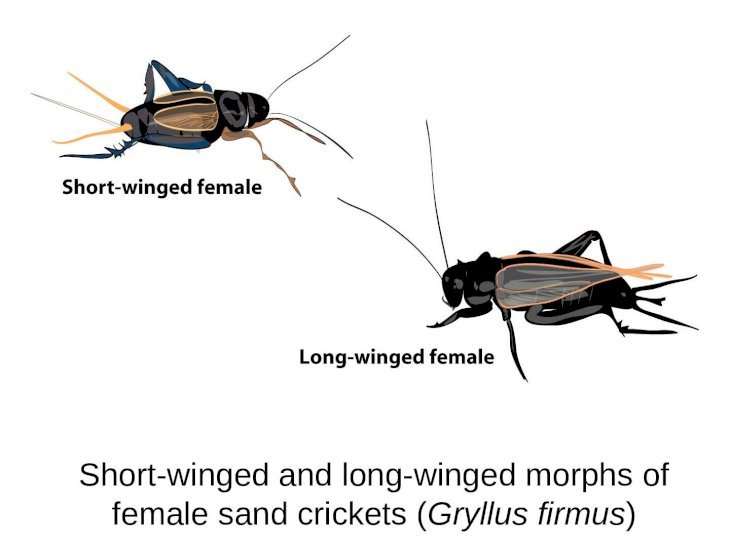 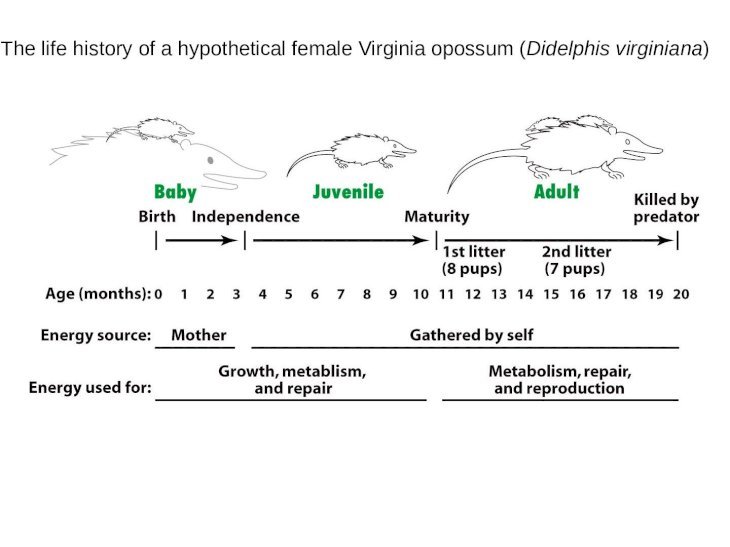 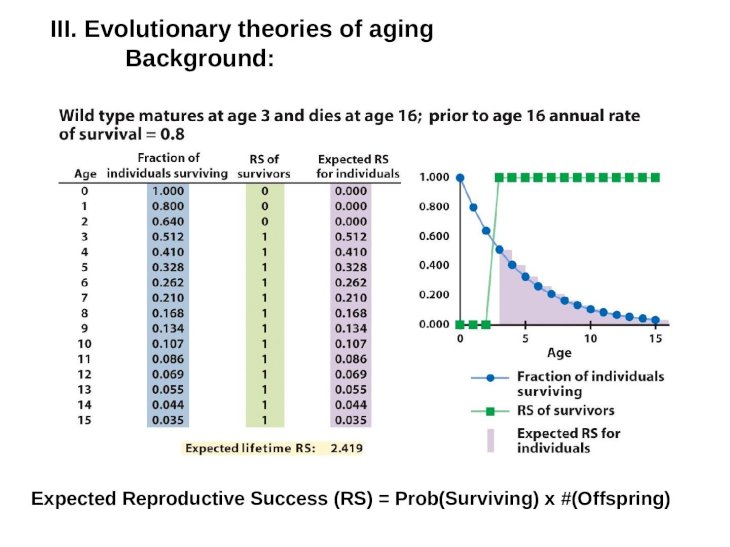 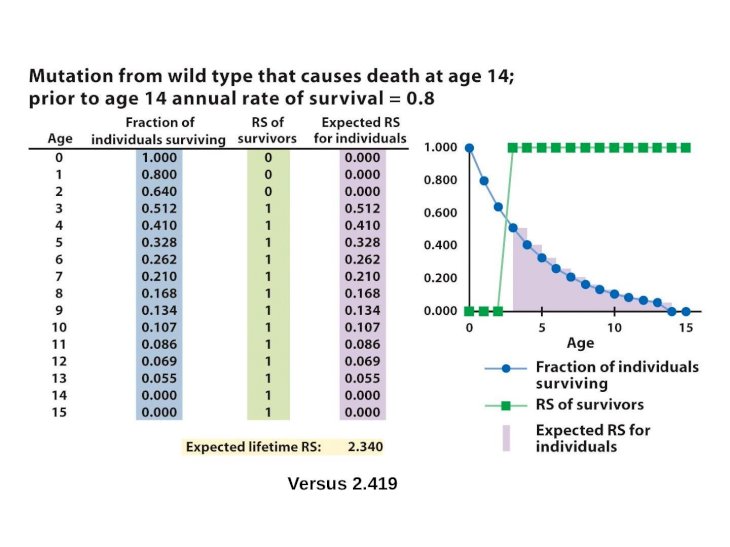 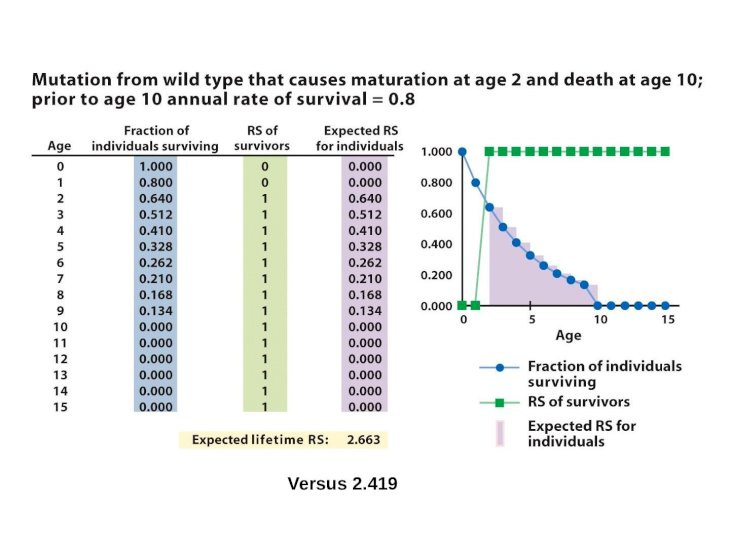 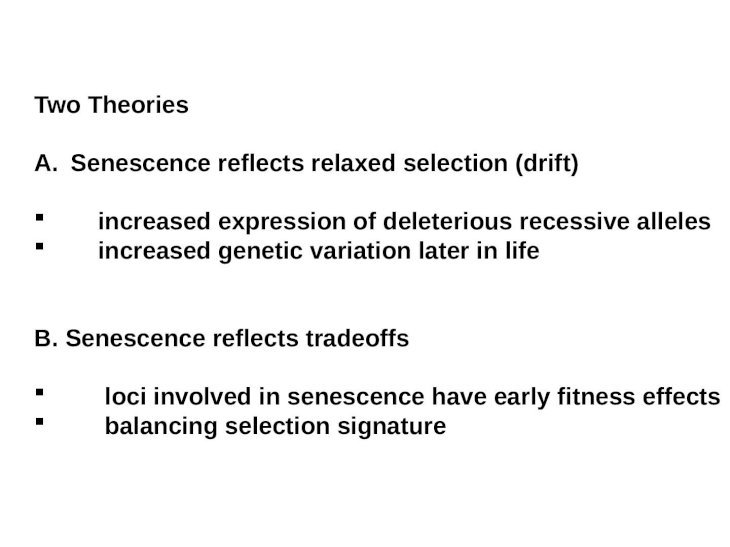 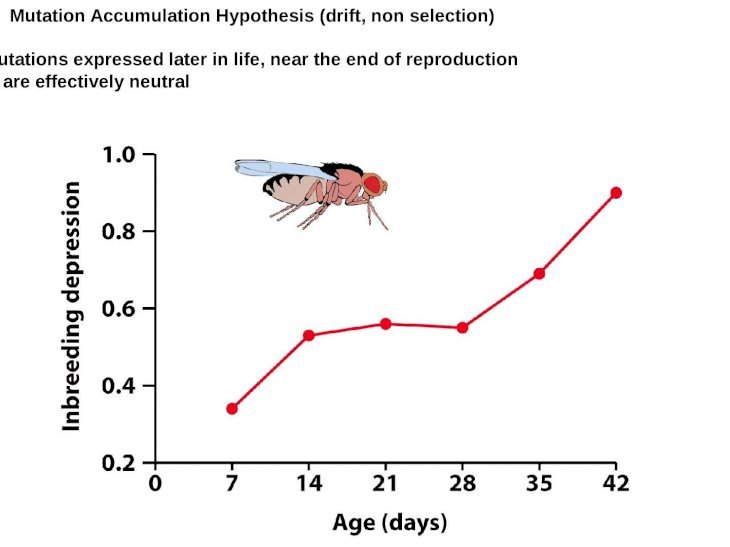 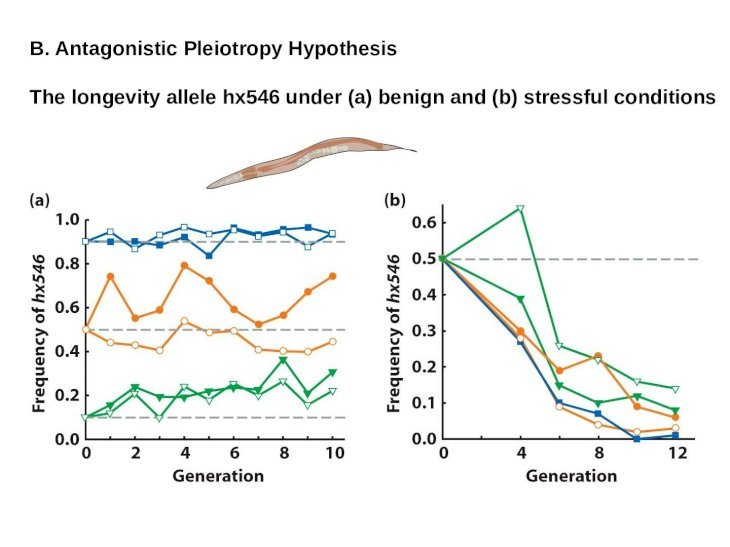 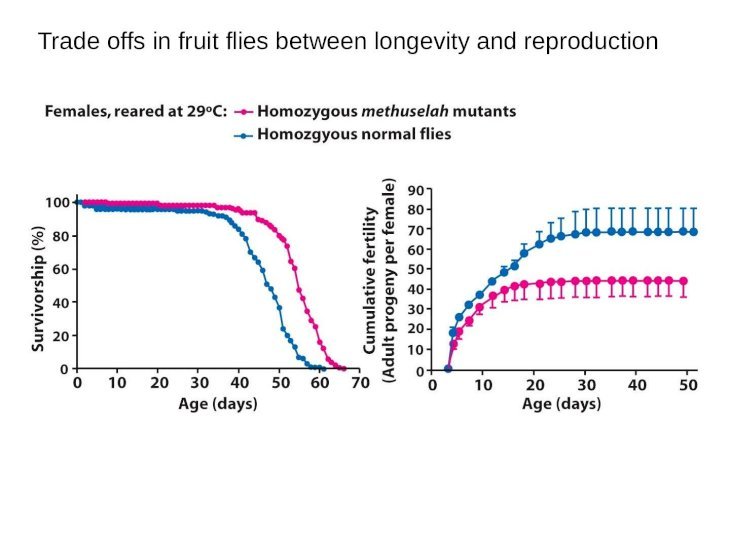 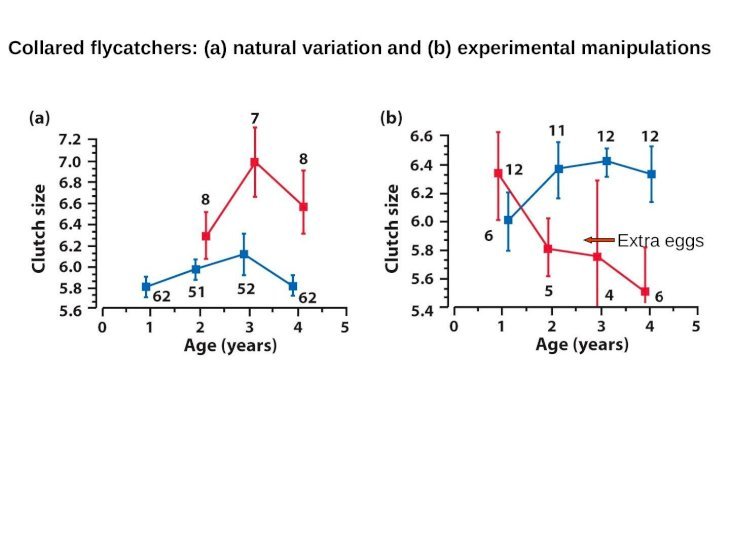 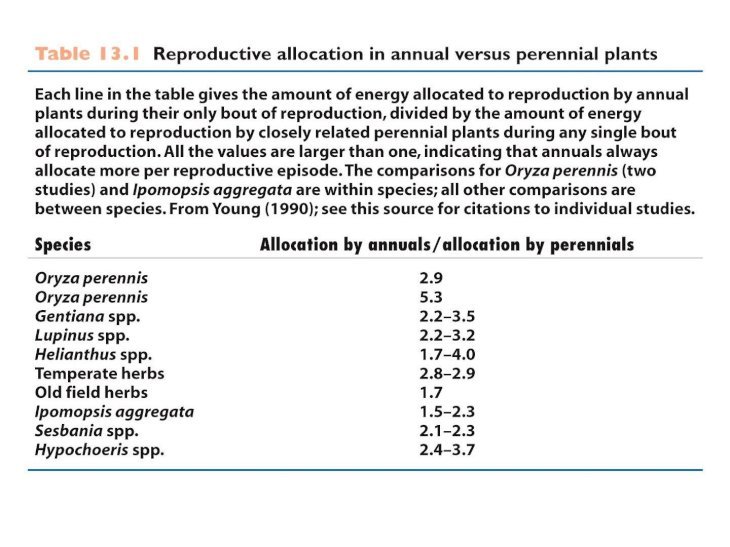 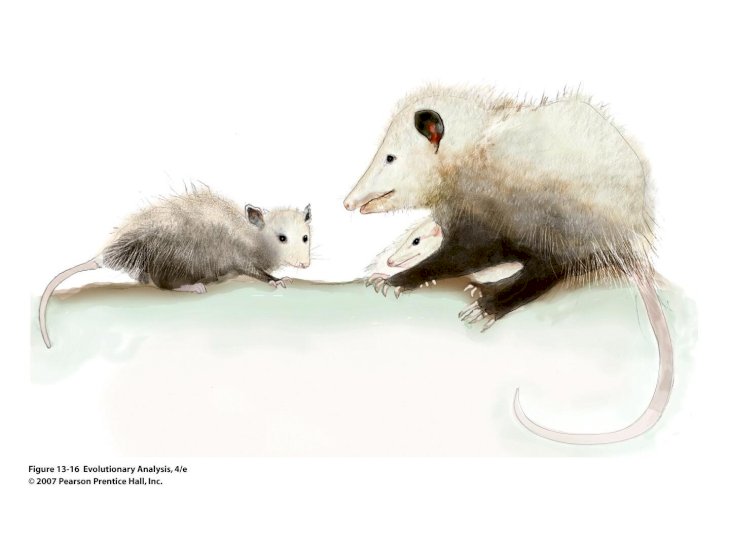 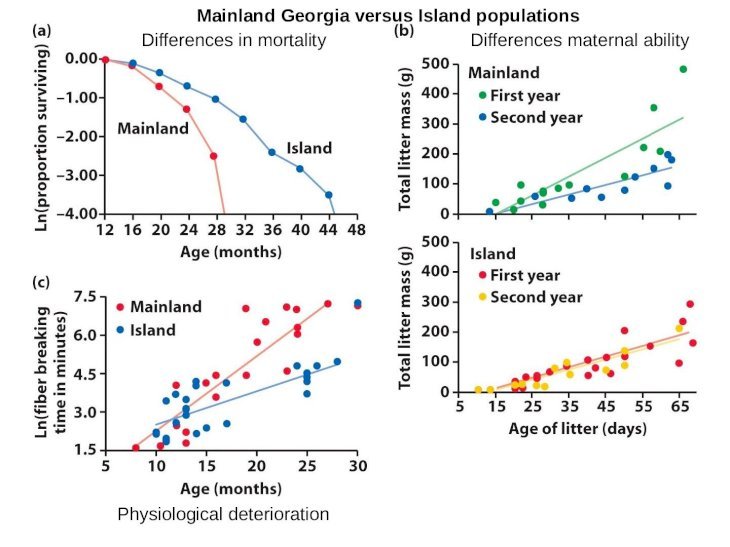 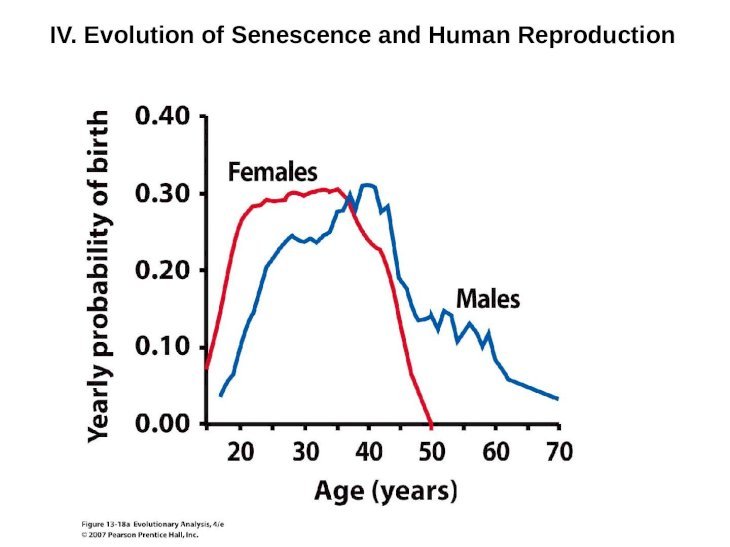 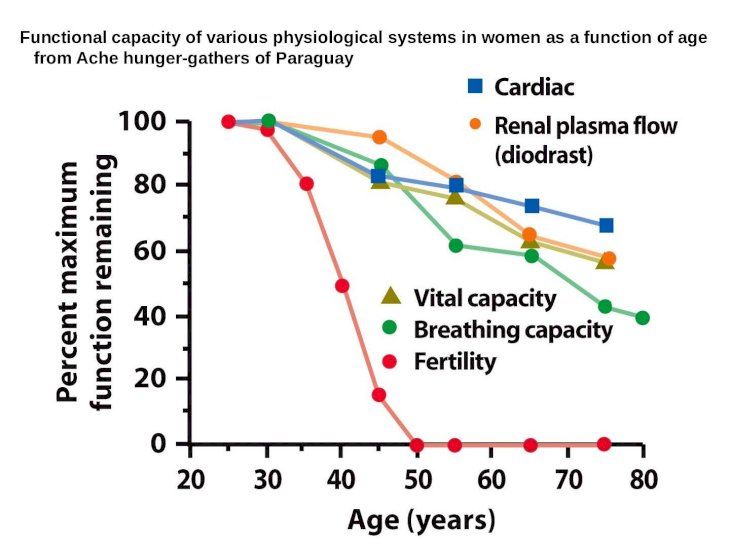 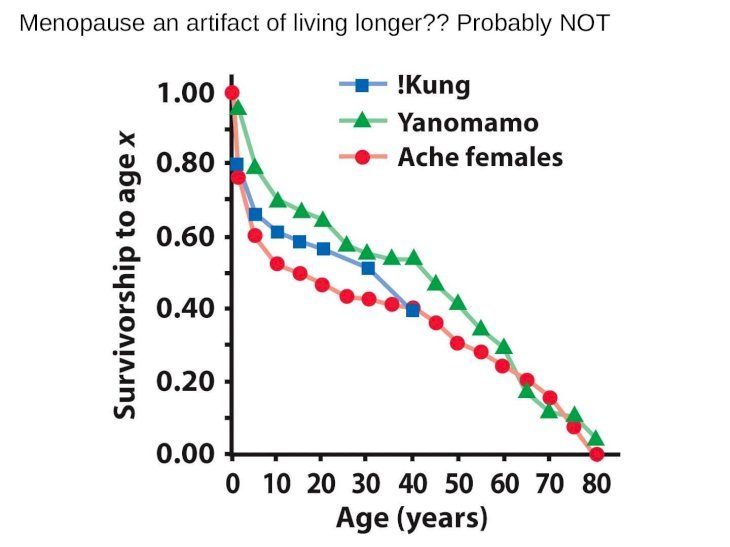 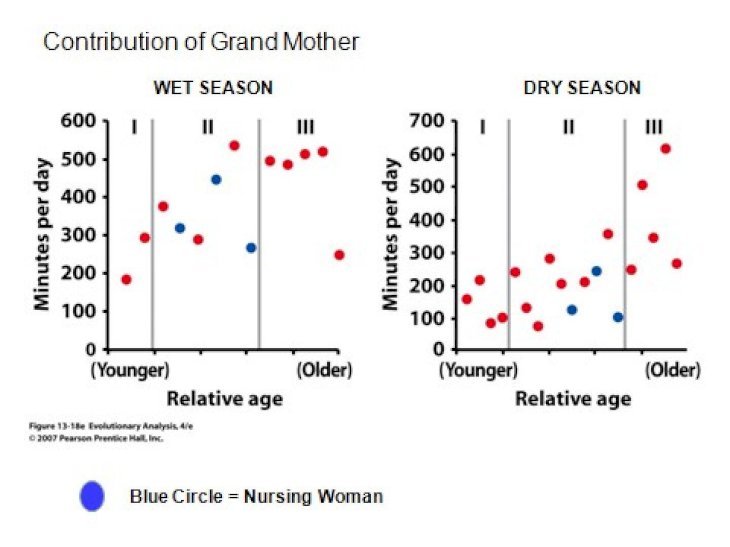 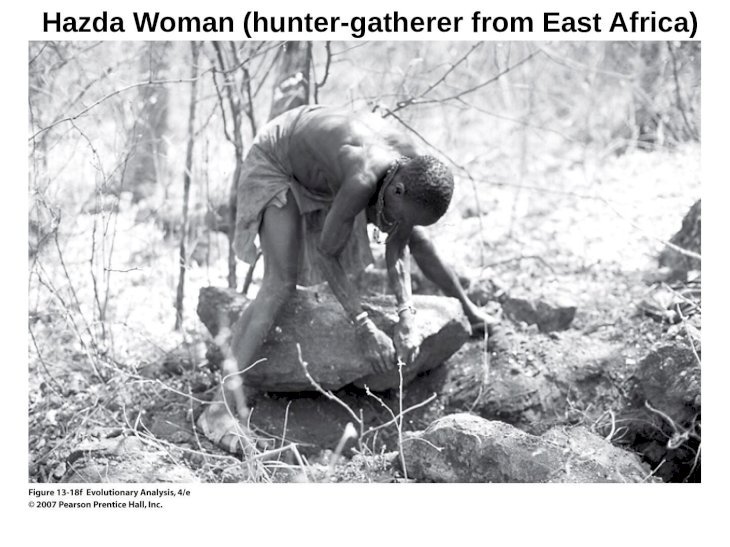 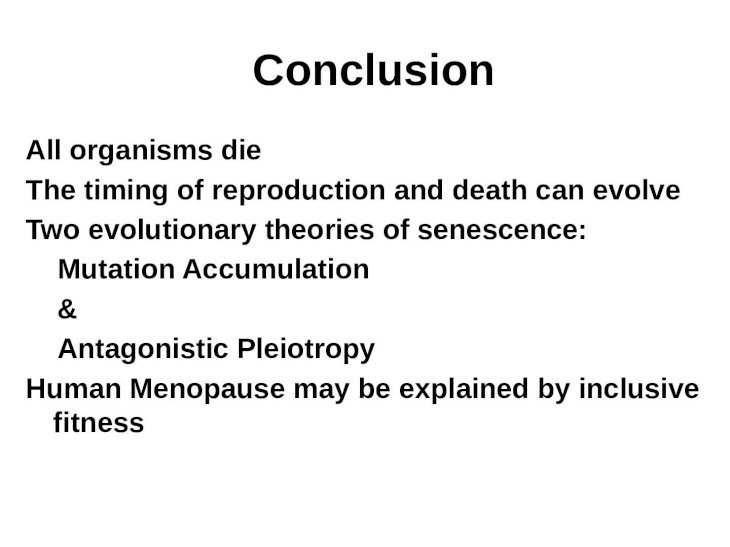 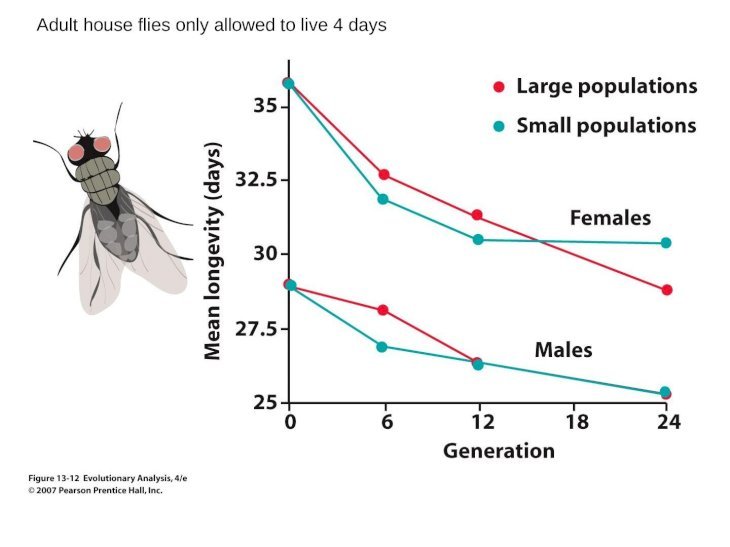 1Age is a very high price to pay for maturity (Tom Stoppard)Prospero in The Tempest says We are such stuff as dreams are made on, and our little life is rounded with a sleep.How did Mark Twain put it? I was dead for millions of years before I was born and it never inconvenienced me a bit.

I. Evidence for senescence and evidence for the evolution of senescence2Figure 13.4 Aging in three animals(a) Aging in a bird. For females in a wild population of collared flycatchers (Ficedula albicollis), the number of young fledged each year declines after age 3 (age-related differences in number fledged are significant at P < 0.001). The probability of survival from one year to the next declines slightly, but not significantly, after age 2. Sample sizes in parentheses. From Gustafsson and Part (1990). (b) Aging in a mammal. For males in a wild population of red deer (Cervus elaphus), the number of calves fathered each year declines sharply after a peak at about age nine; for females, the number of calves produced each year declines gradually starting at about age 13. For both sexes, the probability of surviving from one year to the next is nearly 100% from age 2 to 9. After age 9, the probability of surviving plummets. From Clutton-Brock et al. (1988). (c) Aging in an insect. For females in a laboratory population of fruit flies (Drosophila melanogaster), the average number of eggs laid per day declines after the age of about 12 days. In three laboratory populations, the probability of surviving from one day to the next falls at the age of about 20 days. Modified from Rose (1984).

Mite Kiwi bird5Figure 13.1a Extreme reproductive strategiesHaving devoured their mother from the inside, three thrips egg mites (Adactylidium sp.) prepare to depart her empty cuticle. The mother's legs are visible at lower right (180x). Reproduced by permission from Elbadry and Tawfik (1966).Kiwi bird, 20% of wt towards egg

III. Evolutionary theories of aging Background: Expected Reproductive Success (RS) = Prob(Surviving) x #(Offspring)8Figure 13.10a A simple genetic model reveals two mechanisms through which aging can evolve(a) The life history of individuals with the wild-type genotype. The sum of the values in column 4 gives the expected lifetime reproductive success of wild-type individuals: 2.419.

Versus 2.41910Figure 13.10c A simple genetic model reveals two mechanisms through which aging can evolve(c) The life history of individuals with a mutation that causes maturation at age 2 and death at age 10. The expected lifetime reproductive success of individuals with this mutation is 2.663. The mutation is advantageous. See text for more details.Two Theories

The longevity allele hx546 under (a) benign and (b) stressful conditions13Figure 13.13 Under semi-natural conditions, the age-1 gene in the nematode worm C. elegans exhibits antagonistic pleiotropyThis graph tracks the frequency of the hx546 allele of the age-1 gene, which causes increased longevity, in six experimental populations reared in the lab with ample food. The frequency of hx546 changed little over 10 generations, regardless of its starting frequency, indicating that the allele was effectively neutral. (b) This graph tracks the frequency of the hx546 allele in five populations reared under semi-natural conditions characterized by periodic bouts of starvation. The frequency of hx546 declined rapidly over 12 generations in all five populations, indicating that the allele was strongly selected against. From Walker et al. (2000).

Trade offs in fruit flies between longevity and reproduction14Figure 13.14 The methuselah gene controls a trade-off between reproductive success versus longevity and stress resistanceNormal female fruit flies die younger than homozygous methuselah mutants (a), but they have considerably higher lifetime reproductive success (b). These patterns, detected at 29 degrees C, change at other temperatures. Redrawn from Mockett and Sohal (2006).

At least one gene for which mutations stronglyaffect lifespan in D. melanogaster (Methuselah or Mth)also exhibits extensive natural polymorphism, a naturalcline in allele frequencies that parallels a cline in lifespan,and a molecular signature of selection(Schmidt et al. 2000). Mutant analysis can thereforepotentially reveal genes contributing to natural variation.Such genes can then be subjected tofunctional and evolutionary analyses that test modelpredictions. This path is not easy, however. Althoughthe effects of Mth on lifespan have been recognizedfor more than a decade (Lin et al. 1998), natural allelicvariation at this gene has still not been directly implicatedin the clinal variation in lifespan (Paaby &Schmidt 2008). Of the many candidate genes nominatedby mutagenic or transgenic manipulation, Mthis the only one that has been formally associated withnatural variation in lifespan or ageing. More generally,loci contributing to natural variation in traits such aslifespan, starvation resistance and male mating behaviourshow little overlap with those known to have largeeffects on the same phenotypes when mutated(Mackay et al. 2009). These results suggest that thecandidate-gene approach is not an efficient one fordocumenting the genetic basis of natural variation insenescence.4.

Collared flycatchers: (a) natural variation and (b) experimental manipulationsExtra eggs15Figure 13.15 In collared flycatchers (Ficedula albicollis), natural variation and experimental manipulations demonstrate a trade-off between reproduction early in life versus reproduction late in life(a) Females that first breed at age 1 (blue boxes) have smaller clutches at ages 2, 3, and 4 than females that do not breed until age 2 (red boxes). The error bars indicate the standard errors of the estimated mean clutch sizes; the numbers above the symbols give the sample sizes. (b) Females given extra eggs at age 1 (red boxes) have progressively smaller clutches each year at ages 2, 3, and 4. In contrast, control females (blue boxes) do not begin to show a decline in clutch size until age 4. Note that the vertical scales are different. From Gustafsson and Prt (1990).

17Figure 13.16 A Virginia opossum and her youngOpossums, like other marsupials, have relatively short life spans for mammals. But opossums in some populations have shorter life spans than opossums in others. This suggests that rates of aging evolve in nature.

Differences in mortalityDifferences maternal abilityPhysiological deteriorationMainland Georgia versus Island populations 18Figure 13.17 Female opossums on Sapelo Island age more slowly than female opossums on the mainland(a) The rate of survival from one month to the next falls more rapidly with age for mainland opossums than for island opossums. (b) Each graph shows total litter mass as a function of litter age for females in their first year of reproduction (green or red) and for females in their second year of reproduction (blue or yellow). In mainland females (top graph), offspring in second-year litters grow more slowly than offspring in first-year litters (P < 0.001). In island females, second-year litters grow just as fast as first-year litters. (c) Tail coll

Effect of Short Term Aging on Microstructure Evolution, Pitting and

Influence of aging on evolution of structure, morphology and rheology of base and SBS modified bitumen

Evolution of Aging Katy Nicholson and Coco Shea. Why do organisms age?

The Tick-Tock of Aging? evolution. Instead, aging is thought to entail the passive stochastic accumulation

Review Physical activity, a modulator of aging through ... 13804 AGING The process of aging remains